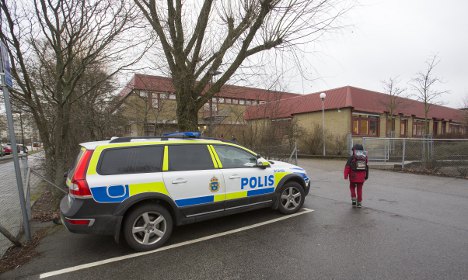 Roine Selind, chairman of the Malmö area of one of Sweden's two teachers' unions, confirmed to newswire TT that the Värner Rydén School is to reopen on Tuesday morning.

"The pupils are welcome tomorrow. We have spent all morning and afternoon in discussions with the employer about what measures are deemed necessary. There are urgent issues that need to be solved tomorrow as well as more long-term solutions," he said.

Crisis talks were held on Monday after the teachers’ union declared the school in the Rosengård area of Malmö too dangerous a place for students and teachers to attend due to widespread violence and criminality.

The current situation has developed since the closure of nearby Örtagård School last autumn. Many of the school's students were relocated to Värner Rydén, bringing conflicts with them, as The Local reported over the weekend.

Catharina Niwhede, of the other teachers' union in Malmö, told newswire TT on Monday that the two schools merging is one of the reasons behind the problem.

"It has been unstable for some time now, we have been working with this all autumn. There hasn't been as much progress as we would have liked to see for it to feel like a safe place to work," she said.

He told TT: "Those fighting should be suspended, not all the others. These 10-15 pupils that this concerns perhaps need to be put in a special teaching group in a separate room."

But he said more teachers, which both of Sweden's two teachers' unions have called for, is not the answer.

"It won't solve any issues if you don't also reclaim some kind of authority. You cannot let the youths be in charge, that's the most important thing," he said.

“I understand that they feel afraid, because there has been too much disorder. After the merger we have far too many pupils here,” he said.

The City of Malmö's education department told TT earlier that they will hire a security firm in order to make the school environment safer. Teaching staff will also be given help with security and conflict management.