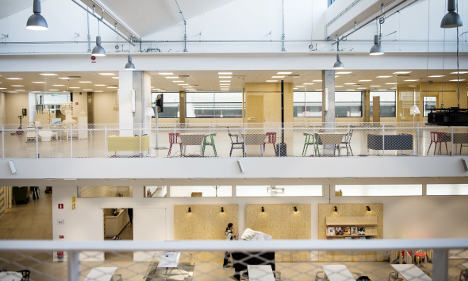 The new collection will use Qi wireless technology to charge devices that are placed on or near the furniture.

"Through research and home visits, we know that people hate cable mess. They worry about not finding the charger and running out of power," Ikea's business area manager of lighting and wireless charging, Jeanette Skjelmose, said in a statement.
"Our new innovative solutions, which integrate wireless charging into home furnishings, will make life at home simpler," she added.
The Home Spot range of desks, bedside tables and lamps will hit stores in Europe and North America in April, Ikea said, with a "global roll-out" in the works.
"This is (a) very early time in the furniture business to blend wireless technology," Jeff Kagan, a technology industry analyst, told the AFP news agency.
"I expect every other furniture maker to jump on this same bandwagon,” he added.
Most new smartphones now have inbuilt Qi wireless charging, which allows them to be charged from any Qi charging service. The idea is to eliminate the need for chargers that only work for specific phone brands or models.
Instead, mobiles can be charged using Qi "charging pads" which use coils to generate a magnetic field. Mobile users can then re-charge their phone batteries simply by placing them on the pad.
Ikea is understood to be the first major global furniture retailer to offer the technology.
Starbucks has already installed wireless charging mats in some of its US cafes, with branches in the UK set to get the technology later this year.
McDonalds is also working on a similar project. Here, the goal is to use the technology to help customers power up fading phones on-the-go.
In January Ikea – which employs 147,000 people worldwide – reported annual profits of $3.74 billion (31.2 billion kronor) for 2014, unchanged from the year before.
Url copied to clipboard!