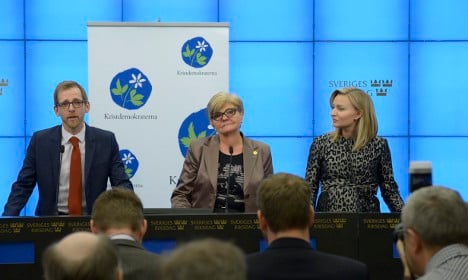 Busch Thor, 28, and Forssmed, 40, are the two names remaining after an initial nomination round to pick the candidates to succeed outgoing party leader Göran Hägglund, who made headlines when he announced his resignation on Twitter, followed by a press conference, earlier this year.

Forssmed said he intends to continue the party's recent facelift.

“I think I am capable of leading a renewal agenda for the Christian Democrats to make us more relevant in Swedish politics, not the least by improving in jobs and economics," he told a press conference on Monday afternoon.

Forssmed has worked close to Hägglund and played a key role in the former centre-right alliance government, but is an unfamiliar face to most Swedes. On the other hand he currently represents the party in parliament, which Busch Thor does not.

The Uppsala councillor is often described as 'value conservative', a label she herself rejects.

“I am a Christian Democrat,” she said.

“We should be a clear voice fighting political top-down solutions, and govern people’s right to self-determination.”

The winner will take over a struggling party. The Christian Democrats are the smallest party in the Swedish parliament. It is one of four parties in the Alliance – the bloc of four centre-right parties that made up the previous centre-right coalition government led by Fredrik Reinfeldt.

“Traditionally, it’s a very religious party, but they have been trying to build wider support for a while now, like CDU in Germany,” political scientist Jörgen Hermansson at Uppsala University told The Local.

It's a renewal process that has so far failed to gain the voters' support. The party won its first seats in parliament in 1985, two decades after the party was set up. It managed just 4.6 percent of the vote in Sweden's general election in 2014, just over the four percent threshold needed for a party to enter parliament.

"Both Forssmed and Busch Thor mark a will to renew the party, but if that in reality manages to attract young voters is something only the future will tell," added Hermansson.

But Magnus Hagevi, political scientist at the Linné University in Växjö, thinks that change will be more radical with Busch Thor at the helm, rather than Forssmed. But he adds it depends on in what direction and how much the party wants to change.

"If the party follows its Christian, social path, [Forssmed] is a candidate, and [Busch Thor] is closer to their conservative values. The latter has grown lately, but to what extent remains to be seen," he told TT.

The two candidates were being quizzed on their politics by the party districts on Monday afternoon, who have to nominate their preferred candidate by 12th March at the latest. The new leader will be formally appointed at a party conference on 25th April.