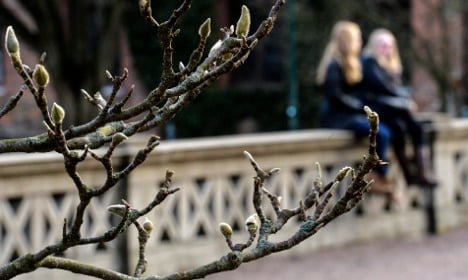 Spring has already sprung in large parts of Sweden, and according to American weather institute WSI the warm temperatures will linger through March, April and May.

“March looks set to be the month when temperatures will reach the highest levels above average. Northern Sweden might see 6C above average. The rest of the country will be at least one degree warmer than normal,” meteorologist Michael Ventrice told Swedish newspaper Expressen.

But he added that sun enthusiasts should be quick, for May is also expected to be one of the rainiest months this spring.

“Northern parts of Sweden could expect up to 12 millimetres more rain than normal,” he said.

Check the weather forecast from your corner of Sweden

But it's not all fun and games. The Local reported last week that for hayfever sufferers the milder weather has brought unwanted side effects.

"We have had milder winters over the last 20 to 25 years, but this winter has been even milder than usual and now spring is arriving," Aslög Dahl, head of the pollen laboratory at the University of Gothenburg, said.

"A lot of people complain at this time of year and think they have a cold but it is actually the pollen causing an allergy. Others may laugh and say this is not possible, but it is," she said.

Forecasters deem spring to have arrived when average daily temperatures remain above zero for seven days in a row. This means that the season has officially arrived in southern parts of Sweden up to just north of Stockholm, and the rest of the country is not far behind.

Have you been out and about enjoying the mild weather? Send your spring snaps to [email protected]