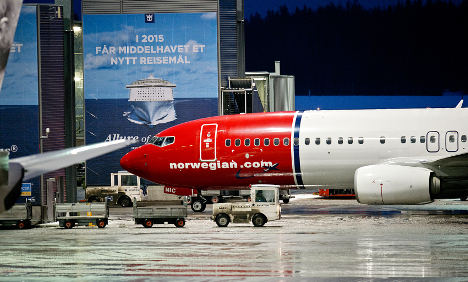 A Norwegian flight grounded in Oslo on Sunday. Photo: TT

"If it ends up being a large strike where several hundreds of pilots take administrative action we will have to lock out cabin staff as well," Norwegian information officer Charlotte Holmbergh Jacobsson told Swedish newswire TT on Tuesday afternoon.

Delays and cancellations affected several flights to Stockholm on Monday and Tuesday after 70 of the airline’s pilots based in Norway went on strike on Saturday after more than three months of fruitless negotiations over pay and conditions.

The Swedish Pilot’s Union has pledged to mount a sympathy strike on March 4th if no agreement is reached between Norway-based pilots and the airline and has said that the strike action could end up involving as many  as 700 pilots working for Norwegian across Scandinavia.

Pilots based in Finland and Spain could be brought in if the strike expands, Norwegian has said.

The strike comes amid growing speculation about the airline’s finances.

On Monday the company’s board held a six hour meeting, but claims that the firm had been declared bankrupt were rejected by the company’s CEO Bjørn Kise, who spoke to Swedish media after the talks.

Budget airline Norwegian is Scandinavia’s third-largest airline and has around 4,500 employees.

Staff working for fellow Scandinavian airline SAS have returned to work after a separate four day strike which led to dozens of cancelled and delayed flights in and out of the Danish capital over the weekend, a key hub for travellers moving on to Malmö and other cities in southern Sweden.