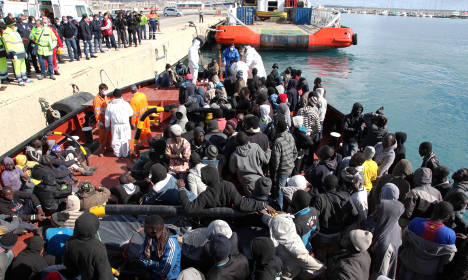 Migrants rescued in the Pozzallo harbour, Sicily last month. Photo: TT
Over 50 million people are currently displaced in the world, many of them caught in a cold and harsh winter. One fifth of these are Syrians in urgent need of humanitarian assistance. Approximately two million of the Syrian refugees are living in refugee camps in Lebanon, Turkey, Jordan and Egypt, where access to medical care and medication is scarce.
Only about two percent of the refugees make their way to Europe. Most of them come through a dangerous boat ride across the Mediterranean Sea. I'm proud of the fact that Sweden last year granted asylum to 26 000 Syrians, just as many as Germany.
Meanwhile, the UNCHR reports that 3419 people died on the perilous journey to Europe. It is a tragic record and it is clear that the Mediterranean Sea is now a sea of death, a giant graveyard of anonymous people united by a single desire – to save their lives.
I am overwhelmed by sadness over the fact that in the year of 2015 there are still no legal ways for refugees to be able to reach Europe in order to seek asylum. It is the desperation and the feeling of having nothing to lose that forces people to pay exorbitant sums to unscrupulous smugglers for a place on an unseaworthy, overcrowded boat.
The Dublin Regulation, which is based on the principle that the Member State in which the asylum seeker first arrives should take responsibility for the person, gives a distorted distribution and I have to admit that the system is failing.
Today, five of the Member States receive 70 percent of the asylum seekers – Sweden, Germany, UK, Italy and France – while, for example, Estonia only received 10 people, Croatia 35 and Latvia 35 in 2013.
It is time for a European quota system that distributes asylum seekers between Member States, based on population, GNP and other relevant factors. However, it must be flexible and take into account people's individual situations such as family and kinship.
In this way we can maintain a common European asylum system that is legally secure and where all asylum seekers are ensured equitable treatment, while all Member States have to take their share of the responsibility. In the long term, I can also imagine that the European asylum authority EASO will have a broader mandate to manage all asylum applications at the EU level.
I, and many others with me, believe that it is a moral obligation for the EU to establish legal and safe routes to Europe for the people who need to escape war and persecution. We can do this for example by issuing humanitarian visas at EU embassies or consular offices in temporary refugee camps around the world.
It should also be mandatory for all the 28 Member States in the European Union to participate in the UNHCR's resettlement program and thereby increase the number of quota refugees who are admitted to the EU.
Today there are 15 Member States that do not receive any quota refugees at all, while Sweden receives 1900 and Germany more than 5 000 per year. If the remaining 26 member states were to follow these examples, we could spare 100 000 people the dangerous boat ride over the Mediterranean and offer them shelter in Europe.
All EU member states are bound by the Geneva Convention to give all asylum applicants a fair examination of their asylum claims and to never return a person if they risk persecution or torture.
No single person or country can single-handedly solve the horrific situation that characterizes the Syrian refugees' lives. But together, we can offer a better life for many more of the mothers, fathers, children and friends who are fleeing the horrors of Syria.
Together we can bring European solidarity to a new level. Europe must become a humanitarian superpower.
Enjoy reading our Tuesday debate articles? Here's how to never miss your favourite features on The Local