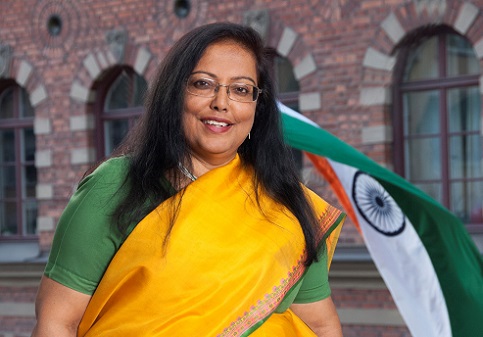 Stockholm, the Venice of the North, the capital of Scandinavia, is the number one tourist destination of all the Nordic countries combined.

It’s also one of the fastest growing cities in Europe, and one of the most innovative.

But it’s also relatively isolated – a roadblock upon which it could stumble.

“Stockholm is on the north fringe of Europe,” Banashri Bose Harrison tells The Local. “But in terms of perception it is much worse. When you tell people that it’s just two hours from Frankfurt, their eyebrows go up. They think it’s farther.”

Bose Harrison, ambassador from India to Sweden since 2012, has spearheaded multiple efforts to increase cooperation between the two nations. A key programme that the embassy initiated last year, India Unlimited, involves organizing a week of  events each year to raise awareness in Sweden about India – and vice versa.

“When I came to Sweden I was surprised by how little people know about contemporary India,” Bose Harrison recalls. “The knowledge is completely outdated, from both sides.”

Armed with a postgraduate degree in economics and some 30 years of international experience, the Bengali diplomat wants to do something about it – for the benefit of all.

“There is great potential for relationships between Sweden and India,” Bose Harrison explains. “India, in its growth process, is focusing on certain areas, areas which are a wonderful fit with the technologies that Sweden is very strong in.”

While Sweden, due to its limited size and human resources, will never be a manufacturing superpower, it is a technological and innovation hub. But India is home to 1.2 billion people – many of whom are looking for work.

The two countries are perfectly poised for a symbiotic relationship in which Sweden could offer exactly what India needs to move forward, Bose Harrison says.

“There is wonderful technology and innovation coming from Sweden. India can be the market, the place where you can manufacture this technology at competitive costs and even develop it further for third country markets.”

Furthermore, the massive Indian market could be an economic goldmine for small Swedish companies which would otherwise be limited.

“One example which illustrates this perfectly is TrueCaller,” Bose Harrison says, referring to a Swedish start-up app which connects phone numbers to wider databases, a sort of advanced caller-ID.

“In India we still struggle with scams and corruption, and the app makes scams more difficult,” Bose Harrison explains. “So the app’s biggest market is actually India, with 45 million users.”

“If India and Sweden collaborate to reduce India’s carbon emissions, everybody gains,” Bose Harrison says. “And if Sweden develops a life-saving cancer detector which can be produced at a third of the cost in India, everybody gains.”

So why aren’t Sweden and India already working hand-in-hand?

“For these companies to work together they need to first know about each other, and be able to visit each other,” the diplomat explains.

“It’s not the physical distance itself, but the lack of connectivity which naturally leads to a complete lack of awareness,” Bose Harrison explains, pointing out that the US and India are more connected despite the greater distance between them.

Indeed, there are no direct flights from Sweden to India, and travelling through Helsinki or Frankfurt, as the ambassador usually does, makes it a 16-hour trip.

“Stockholm has created a brand for itself, calling itself the heart of Scandinavia, but Copenhagen and Helsinki are much better connected,” Bose Harrison exclaims.

“There’s a real issue here. Stockholm has to get its act together and live up to the description it has given itself.”

Of course, it’s a convoluted issue, far from black and white. Any airline would offer more flights if the demand were higher and such journeys were profitable. But mindset and marketing could make a world of difference.

“During my first few months here, I noticed that the tourist boards focused only on China,” Bose Harrison recalls.

“But India is already the country sending the largest groups of tourists to Sweden, and it’s growing. They have to market it more though.”

Despite Sweden’s inherent disadvantages – “the climate and the location” – it possesses a wealth of traits it could use to its advantage.

“For one, Sweden doesn’t capitalize nearly enough on the fact that it is practically an English speaking country,” she remarks.

“People who come here do not need to depend on a guide; they can wander around and discover Sweden on their own. For educational exchange as well as tourism, that is a huge asset.”

In her position as ambassador, Bose Harrison is doing all she can to increase cooperation between the two nations. The second annual India Unlimited Event will kick off in May 2015, and preparations are already in full swing. The embassy is planning a day filled with events in Stockholm, Malmö and Gothenburg, with yoga, Indian dance, food, and more.

“It’s been a voyage of discovery for me as well,” she says.

“I went to the School of Dance and Circus and met three different sets of people doing things which are connected to India. And Karlstad [in central Sweden] has a sister-city relationship with Benares, the heart of Hinduism. There are so many connections that already exist. We just have to connect the dots.”

“That is why the Indian Embassy and the platform we helped to create ‘India Unlimited’ are not just creating awareness of India in Sweden but of Sweden in India.  We want to connect businesses, artistes, chefs, writers…I truly believe that the potential for co-creation is unlimited.”

This article is the first in an ongoing series produced by The Local in partnership with ConnectSweden.