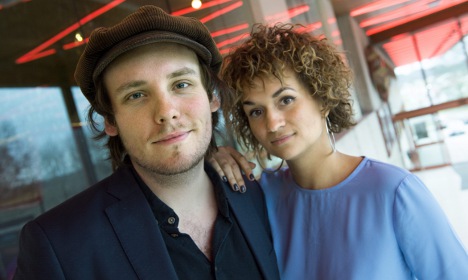 Director Ronnie Sandahl and actor Bianca Kronlöf. Photo: Claudio Bresciani/TT
Svenskjävel, released in English as ‘Underdog’, was a runner-up for the best Nordic film of 2015 at the Gothenburg Film Festival.
It tells the story of Dino, a 19-year-old Swede, who like hundreds of thousands of her compatriots, is lured to Oslo by the high salaries, and ends up having an affair with the father in the family which employs her as a housekeeper.
Dino’s attack on Norwegians (which is close to what many Swedes actually think), does not come unprovoked.
“I think it’s karma,” a family friend of her employer argues, as he swills his whisky. “During the war the Swedes were just standing there bowing to the Germans like prostitutes.
“My life is so much better now when I get my coffee served to me in the morning by a Swede. And when I take a shit, I know there's a Swede to clean it up for me.”
Another friend then asks what the Swede in the room thinks.
“Sweden likes Norway,” Dino says. ”We just see you as mentally disabled cousins who have won the lottery. We don’t begrudge you that.”
The film, which was shot in Oslo in 2013, is scheduled to premiere in Sweden on March 27th.
The film is directed by Swedish writer Ronnie Sandahl and stars popular Swedish comedian Bianca Kronlöf as Dino, and the Norwegian Henrik Rafaelsen as her Norwegian employer.