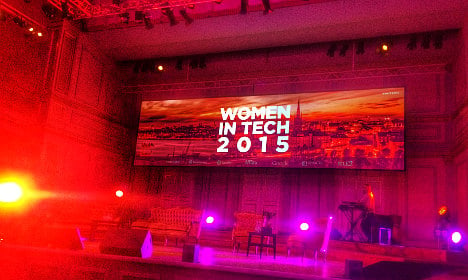 Sweden tops the global rankings when it comes to both gender equality and innovation. So it should come as no surprise that Stockholm has an entire conference devoted to Women in Techology.

But it might surprise some to learn that, with 600 attendees, the event still had a waiting list 500 names long.

MTGx is part of the Modern Times Group, an old, well-established company – but Steiber is part of something brand new.

”MTGx, that's the x factor, the thing that is needed to take this company into the digital era,” he explained. ”We try to bring in those special talents which can do that.”

MTGx focuses on MTG's digital assets, creating and delivering entertainment and working closely with innovation and startup communities around the world.

The conference fits closely with the company's values, and its commitment to equal rights, he said. The conference is only in its second year,  and it has humble origins.

”In Stockholm we have all these tech meetups, and at some of them that I've been to, certain groups were called up to do shoutouts to women,” Steiber explains. ”And I realized that women don't necessarily see all the opportunities that there are in the industry. It can be hard to break in, and to progress.”

Steiber, who has two young daughters himself, took it personally – and decided to make a difference.

”I wanted to create a forum to inspire, and also for people to meet each other, find jobs, get advice, and more,” he said.

"Women In Tech’s (#WIT) mission is to inspire talented women to consider a future in media and technology," the organization's website states, "by providing the network and experience of successful women and men from the corporate and entrepreneurial worlds."

The irony of Steiber's position – the man behind the Women in Technology event – is not lost on him.

”I love it,” he said. ”I have always had women bosses, and I have two girls at home. Even my dog is a female.”

Steiber added that Sweden's strong women are a large part of why gender equality is such a big deal in Sweden – and why the country is never satisfied with its progress.

”We are far from done. Swedish women are strong and ambitious and want to make a difference. Everyone cares about equality, and they don't take the status quo for granted. And oh my god, are they ever persistent,” he exclaimed with a laugh.

But he almost didn't go through with it.

”I had booked the venue last year four or five months in advance, planning it for International Women's Day,” he says. ”But as it approached I realized I didn't have the money or the clout to pull this off.”

Determined to make it a reality, Steiber didn't quit. He started talking.

”I talked to Daniel Ek at Spotify and said, look, you have to help me out with this. And we just made it happen.”

It's already made a lasting impression. The Women in Tech event (WIT) is hosted by an impressive lineup of tech and media companies: not just MTGx and Spotify but also Google, Bonnier, TeliaSonera, Schibsted Growth, and Tele2.

The programme on Friday was impressive as well, and the five-hour event was packed with topics such as 'The passionate intrapreneurs that drive our companies to the next level', 'How to get the girls started early', and the 'Golden rules of leadership – how women promote each other'.

The event was emceed by serial entrepreneur Ola Ahlvarsson – who himself has started more than 20 companies.

And while some of them have ”failed miserably”, Ahlarsson is an optimist.

”We live in a magical era,” he exclaimed as the conference begin. ”We live in an era where someone can have an idea and turn it into a reality. Before it took 30 years to build a company, but now technnology is growing exponentially.”

Looking out across the audience of nearly 600 (primarily) women, Ahlvarsson said that it's no coincidence the event was taking place in Stockholm.

”There are only 16 cities where international tech companies have been truly successful,” he said. ”And Stockholm, of course, is one of them.”

”Diversification is huge,” Fors said. ”It's critical to work with people of all types, not just those who are like you. That is what will help us accelerate, instead of sitting on the train doing exactly the same thing as everyone else.”

”There are a few things in the US which make things very difficult for women. Childcare is one of those things,” the businesswoman remarked. ”I have friends with three kids here in Sweden who still work. That doesn't happen in the US.”

Lack of maternity leave is another thing which 'pushes women back' in the US, she said. Sweden doesn't have that problem – but that doesn't mean things are perfect.

”It is still more common in tech management to be named Anders than to be a woman,” Jennifer Råsten, partner and head of growth and culture management at Netlight Consulting, said later in the programme. ”We women need to create the norms that we want.”

Paulina Söderlund, digital strategy and marketing consultant and founder of the GeekGirlMeetup, agreed.

”There is a huge pool of smart, capable, passionate women out there. We need to mingle.”

Startup Birds is a branch of the business incubator programme at Chalmers in Gothenburg, and their goal is speciffically to recruit more women into startups.

”It just started with us sitting at lunch one day and saying, hey, wouldn't this be more fun if there were more girls here?” Jakobsson recalls. ”So we went out to show the world that there are female founders.”

Other highlights of the event included Anna Wikland, Industry Head at Google, Lisa Parfelt, who has the remarkable title of Difference Maker at Spotify, Yeonmi Park, who escaped from North Korea, and spunky YouTube star Clara Henry, who, at 20 years of age, is the  woman with the most YouTube subscribers in the Nordic nations.

The 'vlogger', who has been trying to learn to brag, said she never used to think of herself as an entrepreneur – but it's all about being true to yourself. Steiber has had friends from across the world contact him about hosting similar events, from Helsinki to New York to Silicon Valley, and he said a New York Women in Technology kickstarter may be in the works.

The Stockholm event wrapped up on Friday night with the very first round of Women in Technology Awards. But Steiber said that the work is far from over.

”This event is important, but what happens between these events is even more important,” he said. ”We want to be an enabling platform. People should create their own groups, meet each other, and start their own events. We can only do so much.”

Events like #wit2015 are so important – about f**king time we create what we should have always had: gender equality across the board