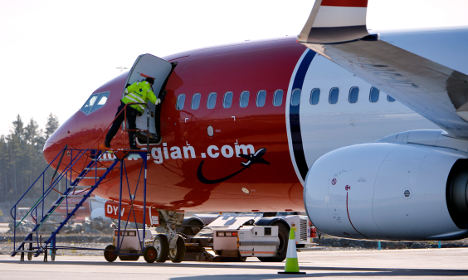 Norwegian's flights in Scandinavia have been cancelled since Wednesday. Photo: Johan Nilsson/TT

Verdens Gang said sources have reported a shift in negotiations has seen Norwegian pilots' unions and the airline agree to focus on resolving the conflict rather than arguing in media.

“Our perception is that both parties are set on finding a solution,” Arve Sigmundstad, communications director at pilots' union Parat, told Verdens Gang.

The news comes after 29-hour marathon talks over the weekend ended late on Sunday without a deal reached.

Practically all domestic flights in both Norway and Sweden have been cancelled on Monday, the airline announced on Sunday night, the apparent exception being a flight from Oslo to Svalbard Airport.

A handful of domestic flights in Denmark were also expected to operate.

Only two hours before the talks broke up on Sunday, Anne-Sissel Skånvik, Norwegian’s spokeswoman, told Norway's state broadcaster NRK that the company hoped for a deal on Sunday night.

The marathon negotiations began at 1pm on Friday afternoon, grinding on for 16 hours until breaking up at 5am.

They then resumed at 4pm on Saturday afternoon continuing until 9pm on Sunday night.

The conflict stems from a demand from the pilots to sign a collective agreement directly with the parent company Norwegian Air Shuttle, NAS, instead of its subsidiary, Norwegian Air Norway, NAN, where they are employed.

The demand is considered by the company to be completely unreasonable and during the conflict the pilots have been transferred into three newly formed subsidiaries: Pilot Services Norway, Denmark and Sweden.

According to Norway’s NTB newswire, unions on Saturday night dropped their insistence at having a collective bargaining agreement with the parent company, settling instead for a deal under which the company guarantees pilots’ wages and working conditions for three years.

More than 700 pilots working for Norwegian Air Norway are involved in the strike which has affected 150,000 passengers so far.