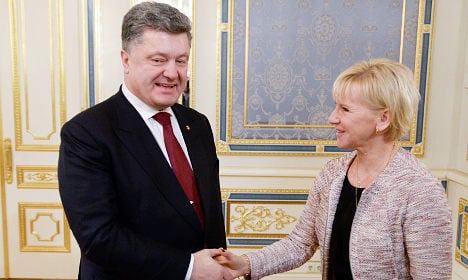 Writing on Facebook, the embassy lambasted the “honoured minister” for the “one-sided” view of the Ukraine conflict she put forward in an opinion piece published on Friday in the Svenska Dagbladet newspaper.

In the article, Wallström said Russia’s annexation of Crimea and its military support for separatists in eastern Ukraine posed the greatest threat to peace in Europe since the end of the Cold War.

In its response, the Russian embassy suggested Sweden and others had provoked Russia into seizing part of its neighbour’s territory by offering Ukraine a pathway to membership of the European Union.

“The main tool turned out to be a state coup, a violent power takeover, which pushed Ukraine into the abyss of civil war,” the embassy wrote.

Carl Bergqvist, a Swedish air force major who tweets under the name Wiseman, likened the Russian embassy's rhetoric to blaming a rape victim for her choice of clothing.

Annika Nordgren Christensen, a member of the Swedish Academy of War Sciences, agreed:

“Russia’s attitude towards Ukraine’s right to self-determination cannot be illustrated more clearly, and this is straight from the horse’s mouth.”

“It’s the ‘will of the West’ that has caused the war, ‘not least Sweden’,” wrote Christensen, who linked to the embassy's Facebook post.

The Russian embassy said in its post that the Ukraine crisis was caused by “the will of the West, not least Sweden as an instigator of the EU’s Eastern Partnership, to do everything to push Kiev into the European Union.”

SEE ALSO: Russian 'plans for war on Sweden' cause concern

NORD STREAM
Who is behind the Nord Stream Baltic pipeline attack?
Url copied to clipboard!