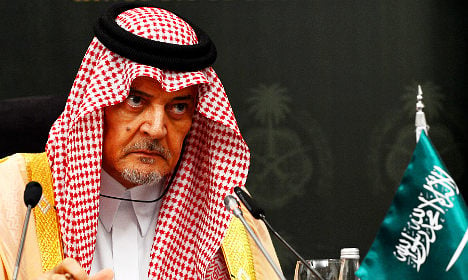 “This isn’t a slap on the hand; it’s a punch in the nose,” he told news agency TT.

The decision by Saudi Arabia, a regional powerhouse, to prevent Wallström from speaking in Cairo on Monday appeared designed to cause embarrassment, he said.

“From a diplomatic perspective it’s incredibly harsh. One couldn’t be more clear.”

“The authorities might make it more difficult for them to import goods, deliveries might get slowed down in customs, and it could become hard to get certain permits.”

The very public discussion in Sweden on whether to extend a military cooperation agreement with Saudi Arabia had sparked strong reactions in Riyadh, said Janson. Sweden’s Green Party, the junior partner in the Social Democrat-led government, wants to scrap the deal, as do several members of Prime Minister Stefan Löfven’s own party.

Swedish criticism of the flogging of the blogger and human rights activists Raif Badawi may also have played a part in the Saudi decision.

“They don’t understand why a morally decadent country like Sweden is getting involved in the Saudi legal system.

“They have sharia; they consider it just and the only law, and it includes lashings and other punishments that we see as outdated.”

Sweden’s government has come under pressure in recent weeks to end a controversial military arms deal with Saudia Arabia.

In November 2005 the then Social Democrat government signed a so called memorandum of understanding with Saudi Arabia. The deal was extended by the centre-right Alliance government in 2010 and will be extended for another five years in 2015 unless either party chooses to end it.