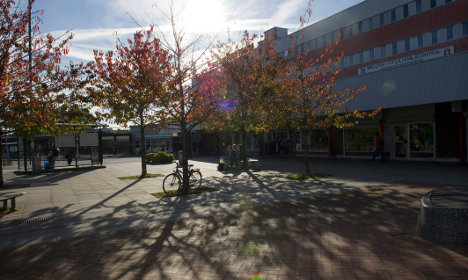 Botkyrka outside Stockholm is one of the most segregated areas in Sweden. Photo: Maja Suslin/SCANPIX

Together with Statistics Sweden, the newspaper has mapped out ethnic segregation in 30 of Sweden's largest municipalities, using a value it calls "the segregation differential". The survey suggests that ethnic segregation has grown in all but two in the past two decades, Luleå in the north of Sweden and Solna near the capital.

Economics professor Olof Åslund, Director General of the Institute for Labour Market and Education Policy Evaluation, told Dagens Nyheter: “That the number of immigrants and native Swedes differs suggests segregation. We can tell that over a period over of time it is on the increase – it is noticeable. The number of people from foreign backgrounds has gone up and it has risen more in areas that already have a large number of immigrants.”

The three most ethnically divided municipalities in 2013 were Botkyrka and Södertälje near Stockholm, and Kristianstad in the south of Sweden. According to Dagens Nyheter this is because the municipalities have invested in high-rise buildings where the number of people from a non-Swedish background is high, but also has large clusters of detached housing areas, largely occupied by well-off native Swedes.

The newspaper has investigated how large a proportion of all immigrants and second-generation immigrants have other foreign-born or people with foreign-born parents as their 400 closest neighbours – and then compared this to the same figure for native Swedes. The difference between the two values forms "the segregation differential".

Compared to 1991, segregation has risen the most in Kristianstad, and Örebro and Linköping in central Sweden. The former has seen an exceptional rise, from 6 percentage units in 1991 to 27 today.

“Seen over a long period, the development could be unfortunate. You make segregation so much stronger. We have a strong influx of people, but don't build as many houses. We, perhaps, aren't even ready to integrate them in school. I am immensely positive to our immigration, but we do have integration problems. Segregation will continue to rise,” he told Dagens Nyheter.

Sweden receives the highest number of refugees per capita in the European Union, although recent figures by the Swedish Migration Board indicated that the number is dropping.

An Ipsos poll earlier this year suggested that integration is the second top concern of eligible voters in Sweden, just behind education.