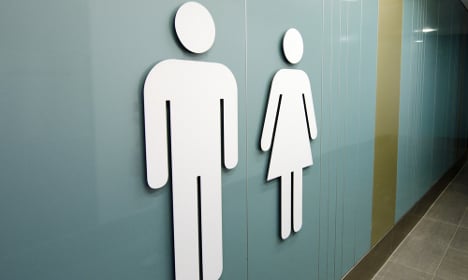 Transgender campaigner and actress Aleksa Lundberg, 33, told Swedish newspaper Metro: “Gender is nothing we can split in two. It exists, just as sexuality, on a grey scale. By having built our society according to a binary gender system we make all transpersons or intersexual persons invisible.”

The Swedish Youth Federation for Lesbian, Gay, Bisexual, Transgender & Queer (LGBTQ) Rights (RFSL Ungdom) and equality campaigners Crossing Boarders are behind the campaign skitikön.nu, which is a Swedish pun meaning both 'never mind the queue' and 'never mind the gender'.

Campaigners propose that instead of dividing toilets into male and female, they should be labelled as 'stand-up' or 'sit-down'. The idea is that everyone should be allowed to choose which toilets to attend, but according to Lundberg it is also a question of transgender people's safety.

“There is always a risk of violence, especially for trans girls. If you use the ladies' toilet they throw you out, and if you have to use the men's toilet there is a risk that you will be beaten up. (…) It has happened to me and many other transgender people several times, no matter if it's in the street or in clubs, that people have pushed me away,” she told Metro.

Sonya Aho, press secretary at the Discrimination Ombudsman, said they have no plans to actively promote the issue in the near future.

"Only if a specific person reacts to it or if they themselves feel isolated or left out. The proposal is commendable, and it if can decrease exclusion it is a good thing, but I would not say that this is something we're going to bring up just out of the blue, unless someone reports it specifically to us," she told Metro.

Sweden, a country already known for its gender neutrality and tolerance, has seen increasing openness when it comes to talking about transsexual people's rights in recent years.

The Local reported in February that new figures showed around 600 people visited Sweden's six sex change surgeries in 2014, compared to only ten or so when the first clinic opened in the mid-1970s.