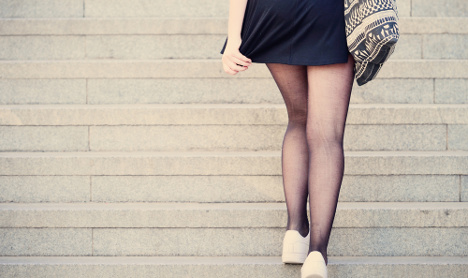 A Swedish teenager unconnected to this case. Photo: TT

The girl – who has not been named in the Swedish media – said she was raped while on the run from her foster home. She said she had travelled to Västerås, just outside Stockholm, but did not have any money, a mobile phone or a place to stay when she got talking to the older man at a playground near his home.

According to her police statements, he invited her in for a drink after explaining that she was hungry and thirsty and police secured evidence that the pair later had sex.

The man initially denied that the girl had been in his home but later admitted it after police found some of his sperm on her underwear.

Under Swedish law, having intercourse with someone under the age of 15 is classified as ‘child rape’, but both Västmanland District Court and Sweden’s Court of Appeal have now thrown out the girl’s case, because the legislation also states that a defendant must “know” or have “reasonable grounds to believe” that the child is under age.

After viewing video evidence including the girl’s interview with police, both courts decided that the 13-year-old’s body was so “well-developed” that the suspect could not have known that she was under the legal age for having sex in Sweden.

News of the court judgments sent Sweden’s social media into a frenzy on Tuesday, with Swedish tabloid Aftonbladet’s version of the story the second most read news article in the country according to social news site socialanyheter.se.

The girl's lawyer Göran Landerdahl told the TT news agency that he planned to take the case to Sweden’s Supreme Court and hoped to set a precedent for future similar claims.

"Judges read newspapers too, so perhaps someone will realize that there are irregularities in this case," he said.
Speaking to Sweden's Aftonbladet newspaper, he added that anyone who had sex with someone who looked "borderline 15 years old" without checking their age, should be called to account.
However, legal expert Madeleine Leijonhufvud believes that the chances that the case will be accepted by the Supreme Court are slim.
"The Supreme Court has been very restrictive when it comes to applying legal sexual abuse clauses to cases involving young teenagers," she told TT, adding that "less serious crime classifications" than "child rape" had often ended up being used in other similar cases.
Url copied to clipboard!