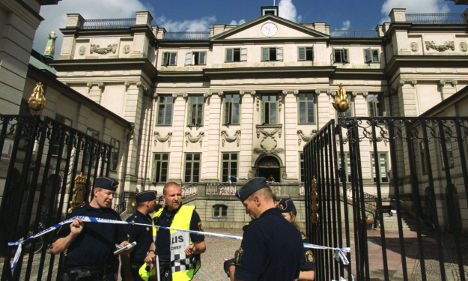 Sweden's Supreme Court. Photo: TT
Julian Assange is wanted for questioning in Stockholm following sex allegations made by two different Swedish women in 2010, claims which he denies.
Sweden's Supreme Court announced on Tuesday that it would consider the Australian's appeal against the decisions of two lower Swedish courts, which ruled that an arrest warrant against him should stand, paving the way for police to question him in Stockholm.
In a statement it said that it had reached the decision in the light of the "conduct of investigations and the principle of proportionality".
Last month, one of Assange's lawyers, Per Samuelson told The Local that his team's submission focussed on the contention that his freedoms had been unreasonably restricted since he sought asylum in the Ecuadorian embassy in London.
He has not left the embassy for two years and according to Samuelson "he has not taken one step outdoors. He has not even leaned out of the window".
Assange, 43, has long argued that extradition to Sweden could lead to him being transferred to the United States to face trial over Wikileaks' publication of classified US military and diplomatic documents. Last week a US court confirmed that a criminal investigation into his activities and those of Wikileaks was ongoing.
TIMELINE: Julian Assange sex allegations
The Wikileaks founder has previously called on Swedish prosecutors to travel to London to question him or, alternatively, to do so by video link. The British Foreign Office said it welcomed this possibility and would help to facilitate this, but prosecutors in Stockholm argued that it was not normal legal practice.
In February, the UK's Deputy Prime Minister Nick Clegg said that Julian Assange's residence at the Ecuadorian embassy was 'frustrating' for both British and Swedish officials after figures emerged that the Wikileaks founder's security has so far cost British taxpayers around 125 million kronor ($15 million).
A win in the Swedish Supreme Court would – in theory – allow Julian Assange to leave the embassy without fear of arrest over the rape and sexual assault allegations. He has already been granted a safe passage to Ecuador.
But in practice, British police could still hold him for breaking the bail conditions he was under at the time he sought political asylum in the South American nation's London embassy.
Wikileaks responded to the Supreme Court development on Twitter, saying: "US case continues and the UK says they will arrest Assange anyway, even if the Swedish extradition warrant drops".
Url copied to clipboard!