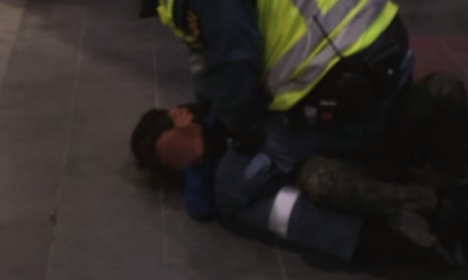 A screenshot from a video originally obtained by the Sydsvenskan newspaper.

One of the children was allegedly assaulted by two security guards at the train station in Malmö on February 6th. Regional newspaper Sydsvenskan obtained a video that appeared to show one of the guards pushing the nine-year-old on to the ground, sitting on him and holding his hands over his mouth.

The second guard was shown in the same video clip, restraining the older boy on a bench at the station.The event was filmed by several bystanders on their mobile phones.

A television crime show run by SVT has now obtained a CCTV video which also shows events before the physical altercation.

The video shows the two boys standing at the train station with the security guards. The younger one suddenly appears to react to something and acts out at one of the men, who then grabs him. As the boy tries to get free by kicking at the guards, they wrestle him to the ground.

The guards are being investigated by Swedish police for assault, but Swedish criminologist Leif GW Persson told SVT's Crime of the Week ('Veckans brott') show that he believes the case will be dropped.

“He starts to fight, spit and bite and it's in that situation that the guard puts his hand over his mouth. I find it difficult to see any other ways in which you could have solved that situation,” he told a reporter on the show, which aired on Tuesday night.

p { margin-bottom: 0.25cm; line-height: 120%; }a:link { }
The two boys – reported in Swedish media as brothers, although this has gone unconfirmed by police – went missing for days after the incident and were eventually found in Denmark. Swedish police told The Local last month that they were now in the care of Danish social services.