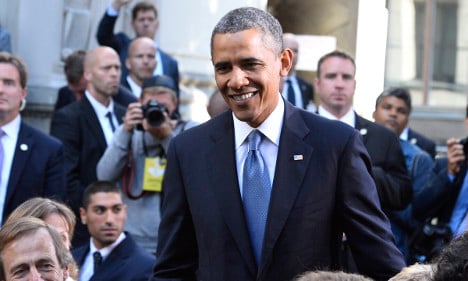 President Obama during a visit to Sweden in 2013. Photo: TT
Forman will hold talks with Jews in Stockholm on Friday before heading to the southern city of Malmö on Monday.
Lena Posner-Korosi, President of the Council of Sweden's Jewish communities, has told The Local that she welcomes the move, which was organized in the wake of growing numbers of attacks on Jews in Malmö, Gothenburg and Stockholm as well as the recent terror shootings in Copenhagen and Paris.
"I think it is an important statement from the US that they are concerned about what is happening in Europe and especially in Scandinavia, and they have reason to be concerned," she said.
"What we are facing now is not just an issue for the Jewish community, it is a threat to the whole western democratic world…we appreciate everyone who is concerned," she added.
Ira Forman has been working for the US government since 2013, following 30 years of experience in Jewish communal work and public service.
His predecessor, Hannah Rosenthal, visited Malmö two years ago and criticized comments by the city's former Mayor Ilmar Reepalu, who was frequently accused of using anti-Semitic language during his tenure. Forman will use his trip to look at how the municipality is currently tackling religious hatred.
He is scheduled to hold meetings with the city's new Social Democrat Mayor Katrin Stjernfeldt Jammeh, as well as campaigner Siavosh Derakhti, who a few years ago started the initiative 'Young Muslims against anti-Semitism', for which he won a Raoul Wallenberg Prize, a humanitarian award named after the Swedish businessman who saved the lives of tens of  Jews in Nazi-occupied Hungary during the Holocaust. Siavosh Derakhti (centre) with former Swedish Prime Minister Fredrik Reinfeldt and President Obama. Photo: Private
Derakhti works with schools and community groups to bring young Jews and Muslims aged between 14 and 20 together and has already met directly with President Obama during the US leader's visit to Stockholm in 2013.
"Malmö is a very segregated city so one of the problems is that Muslims youngsters don't meet many Jews. When they meet for the first time, they want to fight because they don't have so much knowledge about each other but then they learn more," he told The Local.
"I will be talking to Ira Forman about what we do…the fact he is coming shows that we have a big problem in Sweden and especially here in Malmö. Politicians haven't always really supported the community in the past but we have had some better progress recently," he added.
"We have to fight, but we have to fight with love, knowledge, and respect."
Posner-Korosi agrees that political awareness of anti-Semitism has increased across Sweden in recent months and says the Jewish community feels safer since two new directives were issued after the deadly shootings in Copenhagen, ensuring that police officers guarding Jewish buildings have machine guns.
"We are getting better protection than we were, but then again it is no guarantee. Decisions are made week by week between them [politicians] and the police. As time goes by then they will lower their guard and that could be dangerous," she said.
Url copied to clipboard!