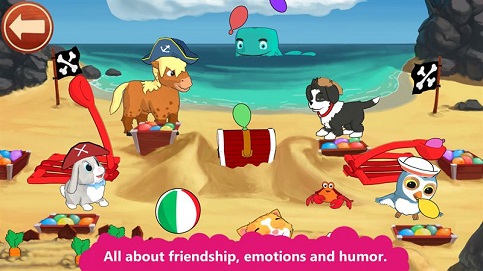 Few people would place an image of Gandhi adjacent to a picture of Hitler. But that's exactly what mother-of-two Rosie Linder did last week, standing on stage in front of 600 people at the Women in Technology event.

“What is the difference between these two men?” she asked the audience.

Pretty much anyone could offer an entire list of attributes that separate the two men – but according to Linder, it all boils down to one thing.

“The difference is empathy,” she said. “We need more Gandhis in this world and fewer Hitlers.”

Rosie Linder, CEO of @PeppyPals believes the power of empathy can be taught using tech. It's important! #WIT2015 pic.twitter.com/1gMedpGalz

Rosie Linder is the CEO and founder of Peppy Pals, a deceptively simple educational game for kids.

Three years ago, the mum grew dissatisfied with the games on offer for children and adolescents, including the games played by her own two children.

“The market for children's apps was full of superficial and gender-stereotyped games,” Linder told The Local after the event.

“I thought, how hard can it be to create a game with a good message?”

That message is empathy, an attribute which Linder says can – and must – be taught. “Today we only focus on achievements, and bullying is increasing,” she explained. “But research shows that if you practice Emotional Intelligence (EQ) as well, you also achieve better.”

When she couldn’t find any games involving learning Emotional Intelligence, Linder decided to create her own. Thanks to finding a strong and passionate team of developers called Talawa Games, along with support from Almi, business incubator Sting, and start-up collective SUP46, her vision turned into a reality.

The game, Peppy Pals, contains neither words nor written language, yet Linder says that it has the capacity to teach more than most games available today.

“Children don’t even realize they’re learning, but they’re practicing empathy and emotions while they have fun,” she explained.

A video demo of the game shows a nervous pup trying to gather the courage to go down a slide in a playground. The player assists the dog to take a deep breath before taking the leap – and then the dog proceeds to help a nervous little owl with the same problem.

“We have tested the game in kindergartens, and the response from children and teachers is fantastic,” Linder told The Local.

The first version of the game, Peppy Pals Farm, was released in 2013, and as with any start-up, progress was somewhat slow, though steady. But now, with the recent release of the new app Peppy Pals Beach as well as a series of accompanying books, the game’s popularity is skyrocketing.

“Amazon featured us as the app of the day, just because they thought our game was good and different,” Linder told The Local. “And now the game has been downloaded 60,000 times in something like 40 countries.”

Parents, children, and media alike have praised the game, which fosters benevolence and develops empathy through positive reinforcement.

“The response has been fantastic,” Linder said. “I never imagined so many people would be interested.”

Since the game has no text or language it’s universal Linder said that the primary markets right now are the US, Sweden, the UK, and Germany.

“We do have proof of concept, but the journey has just started,” the CEO remarked, adding that the company is looking for investors to scale up the business globally. It’s quite the journey for a woman who never saw herself as an entrepreneur.

“I’m not a tech woman,” Linder remarked. “And I’m not young; I’m not a typical gaming entrepreneur. This field is made up of 90 percent men.”

But now the game-maker is a visionary who hopes to inspire not just women, but immigrants in Sweden as well, to start their own companies.

“I came to Sweden from Iran when I was 18,” she said. “And Sweden is a dreamland for starting companies. It’s fantastic.”

Linder added that there are many resources and plenty of assistance for new companies in Sweden – but that you have to be willing to ask for them.

“You have to have that personality where you can just call up and ask. I’m not very Swedish in that regard,” she said.

“Business is all about relations, and my experience is that most people are very helpful if they can see your passion and drive.”