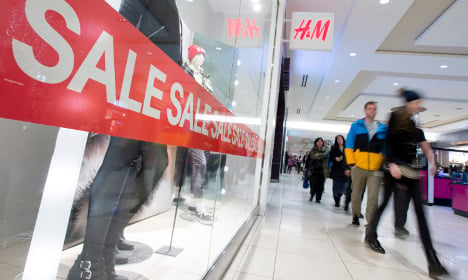 In the report, which also mentions international brands such as Adidas, Marks and Spencer and Gap, HRW interviews workers at 73 factories in Cambodia and many tell of forced overtime, few opportunities to take a break, and of sexual harassment.

In one of the factories, which produces clothes for H&M, workers describe how they have been made to work on their days off. They also claim that staff at one of the factory's sub contractors uses children as cheap labour.

“Some of the worst employment related crimes happen at the larger factories' smaller suppliers. The reason is that nobody really investigates them,” Aruna Kashyap, who focuses on women's rights at HRW, told Swedish broadcaster SVT. In one factory, workers claimed that their productivity was being monitored on behalf of H&M.

They are now assessing how much time it takes to make a shirt. I don't know what H&M is thinking but this is very difficult for workers. (…) We can't rest. (…) For some types of shirts they are setting 2,000 as quota. We have to meet this quota every day. Otherwise we get shouted at,” he said in an interview with HRW.

H&M representatives told HRW that they have not commissioned any productivity studies in their supplier factories, but added it was possible it could have been done without their knowledge.

Press officer Håcan Andersson told SVT that they have sought information to find out what factories are involved.

“We have asked HRW to share the information about the alleged H&M suppliers mentioned in the report so that we can follow it up on site, but they have not been willing to do that,” he wrote in an email.

He added that H&M representatives are going to meet with HRW later this week.

“They have shown interest in the report and is one of few clothing companies that openly publish the factories they work with,” Nisha Varia, advocacy director of HRW's women's rights division, told SVT.