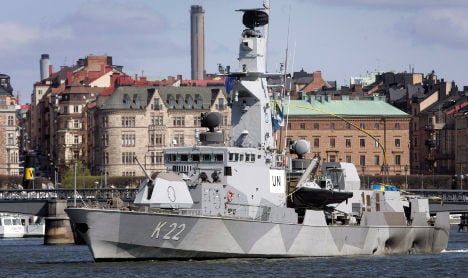 Swedish ship HMS Gävle will be modernized under the plans. Photo: TT
Peter Hultqvist announced on Thursday that the government planned to boost protection from potential intruders in Swedish waters, by increasing defence spending by six billion kronor ($696 million) between 2016 and 2020.
Prime Minister Stefan Löfven previously mooted strengthening the country's navy after revealing that Sweden had "conclusive proof" that a foreign vessel was present in Stockholm's archipelago in October, following a search that made international headlines.
Sweden’s armed forces later estimated that as many as four submarines were operating in the Stockholm Archipelago last autumn.
"Submarine hunting is a priority. We've had incidents showing that it is very important to have an increased capacity for anti-submarine warfare. We must do what we can to maintain and develop our skills. It is very important to protect Sweden's sovereignty," Hultqvist told Swedish newspaper Dagens Nyheter ahead of a media briefing.
He added that Sweden's navy would take part in more military exercises, naval ships would get larger crews and ships and boats would be taken out of action if they were not seen to be suitable for use in the current climate.
Two key military ships, Gävle and Sundsvall, are set to be significantly modernized with new sensors and other technical equipment designed to help Sweden better spot submarines in its waters.
Sweden will also return troops to Gotland in the Baltic Sea, following a decade-long absence from the waters.
Around 150 soldiers are set to be stationed on the island which is Sweden's largest and lies between the Nordic nation and Latvia.
The Local meets Sweden's Defence Minister
"We are devoting a considerable sum of money to this mid-term modification," said Hultqvist.
But critics argue that the six billion kronor pledge is much less than the armed forces need to modernize their fleet and that the Swedish military is set to come under increasing financial pressure when  government plans to raise payroll taxes for employers hiring young people come into action.
The Chairman of the Parliamentary Defence Committee, Allan Widman from the centre-right Liberal Party, told the TT news agency: "It's too little money too late in the [parliamentary] term".
According to Swedish newspaper Svenska Dagbladet, the armed forces asked for 16 billion kronor. However the publication says that the finance ministry initially offered two billion kronor, so the figure released on Thursday is an improvement on that.
Sweden has historically portrayed itself as neutral, but the country's defence capabilities have been called into question since last October's submarine hunt and as Russia's military presence in the region continues to grow.
Last month, Estonia-based international think tank International Centre for Defence and Security (ICDS) warned that Sweden might not be able to defend itself against Russia, should its Baltic neighbour become more aggressive in future.
Sweden has already announced closer military cooperation with both Finland and Denmark, but has so far ruled out joining Nato.
A bill on the proposed fresh spending will be introduced to parliament at the end of April and is expected to be passed following an agreement between the centre-left coalition and the country's centre-right Alliance parties to cooperate on security and defence issues.