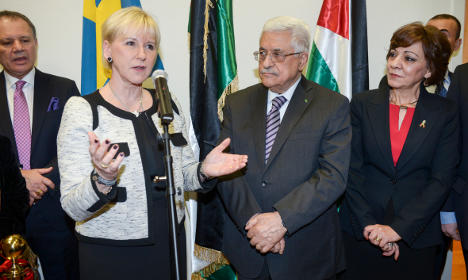 The visit came after Saudi Arabia recalled its ambassador from Stockholm on Tuesday, accusing Sweden's foreign minister of "flagrant interference" in its internal affairs after she criticized the country's human rights record.

The move emerged as Sweden scrapped a long-standing military deal with the Saudis after accusing the country of blocking Wallström from speaking at an Arab League meeting.

The Social Democrats refused to cite human rights as a motive for the decision but Wallström previously said her opening speech at Monday's meeting in Cairo had been blocked by the Saudis because of her pro-democracy stance in the region.

The Swedish foreign ministry told TT on Wednesday that they expected meetings with more representatives from Arab League nations.

"A couple of them have been in touch in the last couple of days and we are ready for meetings on various political levels," foreign ministry press officer Erik Wirkensjö said.

The Palestinian ambassador said after the meeting with Wallström that she hoped the crisis would soon blow over.

"I think potential misunderstanding or diverging views between Sweden and the countries in the Arab League can and will be solved through continued dialogue and exchange of views. We hope that the recent incident will be cleared up in the coming days or weeks," she said.

"Our relations with Sweden are deep, long lasting and have been strengthened further by the recognition of Palestine and the historic visit by President Mahmoud Abbas [to Sweden]," she added.

The decision caused a diplomatic spat with Israel, which temporarily recalled its ambassador from Sweden.