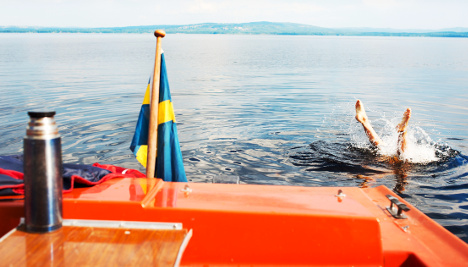 Rather than the dark and desolate place depicted in the Wallander crime dramas, Sweden is seen by Brits as a clean and beautiful place, as well as a force for good in the world, according to a survey of The Local's UK-based readers. But Sweden’s much-praised food and start-up scenes aren't yet top-of-mind.

The survey included questions about their connections to, and attitudes, toward Sweden. Respondents were also asked to provide three words that come to mind when they think of Sweden. The results offer insights into what Brits think of Sweden – and above all, they think it’s clean.

“Clean, beautiful, nature, equality, Abba, and Ikea seems to sum it up,” Nicola Clase, Swedish ambassador to the UK, told The Local after viewing the report.

Among other things, the survey found that 92 percent of The Local’s UK-based readers are considering a visit to Sweden in the future. Of those, 44 percent said they would consider taking a holiday in Sweden within the next year.

More than 70 percent of the respondents had already visited Sweden, and most of them had travelled to the country multiple times.

But the results, based on responses gathered from 452 of The Local’s 100,000 UK-based readers, showed that UK interest in Sweden goes far beyond tourism. British readers have a distinctly positive impression of what it means to be Swedish.

When asked if Sweden was a highly innovative country, an overwhelming 69 percent of respondents said yes, while 21 percent was unsure. When asked if Swedish products were well-designed, 87 percent said yes, and only 4 percent disagreed.

"The results are really positive and show the great relationship between the UK and Sweden," Clase said. "It's wonderful that UK readers see Sweden as innovative, environmentally friendly, and a force for good in the world.”

Nearly 70 percent of readers also said they believe Sweden is a force of good in the world, and that Swedish companies can be trusted.

“What’s interesting here is that our readers get a warts-and-all view of Sweden from our daily reporting, the good and the bad,” said Paul Rapacioli, CEO of The Local. “And yet the results were still uniformly positive. So the goodwill clearly runs deep.”

Sweden’s devotion to the environment has also made a distinct impression on UK readers, with 85 percent agreeing that the country takes sustainability seriously. Gender equality is another impressive Swedish export, the survey reveals, with 62 percent of respondents saying that Sweden’s gender equality gives the nation a competitive advantage.

“Given the overall positive attitudes, it’s not surprising that everybody wants to come here, to have a bit of that Swedishness rub off on them,” Rapacioli remarked.

“Anyone promoting a Swedish brand, or indeed the country itself, in the UK has a terrific competitive advantage,” Rapacioli said.

“But they must make sure they cultivate this advantage intelligently and with due respect for British values. Because without the right kind of cultural awareness, even this level of admiration can turn sour.”

But the survey also revealed there was room for improving foreigners’ awareness of current trends in Sweden.

While Sweden has received a steady stream of press and praise for its booming start-up scene, the survey results indicate that “Sweden” and “start-up” are not necessarily synonymous in the UK.

More than half of respondents, 56 percent, were unsure whether Sweden was a great place for start-ups. And 14 percent disagreed outright.

"It looks like we need to further strengthen the communication that Sweden is a great country for start-ups," Jessica Stark, CEO and co-founder of start-up co-working space SUP46, told The Local. "Stockholm is one of the absolutely top start-up cities in the world."

A recent report from Atomico revealed that Stockholm has the largest number of billion dollar start-ups in Europe, Stark said.

"Per capita Stockholm is second in the world after Silicon Valley."

Stark added that the success stories of companies like Spotify, King, Klarna, and Mojang are crucial for the next generation of start-ups and entrepreneurs.

Ten Swedish start-ups you should know about

"They see that it is possible to build a company that can conquer the world," she said. "And for the moment we definitely see a growing start-up community in Stockholm. Last year there was a 338 percent growth in VC funding."

And despite respondents' faith in the quality of Swedish design, 41 percent of readers were also unsure whether or not they would “prefer to buy Swedish, given the choice”.

The same percentage was unsure if Sweden is a “good place for 'foodies'”, and 21 percent disagreed.

"I actually interpret this research as very positive," Hovstadius told The Local. "Our research shows that in 2009 the awareness and connection to food and Sweden was close to zero, and now 38 percent say Sweden is a great place for foodies." Try Swedish is a project aiming to "make Sweden the best country for food by 2020", and Hovstadius, who is also country manager of VisitSweden in the UK, said the agency has only been promoting Swedish food in the UK since 2011.

The survey, she said, shows that they are making progress.

"Before Sweden was known for the beautiful countryside, welfare, Abba, and Ikea – but food?"

And although it is a "great challenge" to compete with food nations like France, Italy, and Spain, Hovstadius noted that even Spain built a food reputation in just 15 to 20 years.

"We still have a lot of work to do, and now we have to work harder," she added. "But the good news is that, with the last few years of development in Sweden and the many new great restaurants and cafes, the story will get even better."

Paul Johnston, British Ambassador to Sweden, said it was great to see how much Brits love Sweden.

"I know from personal experience that almost every visitor we've had in our four years here has gone away in love with this country, and determined to come back," he told The Local. "It's a really strong foundation for a wider relationship."