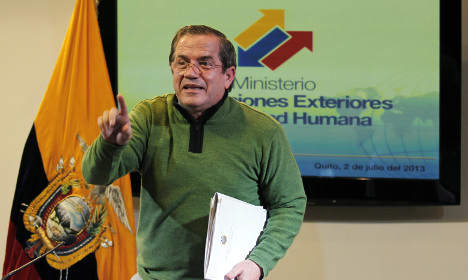 Assange took refuge in the Ecuadoran embassy in 2012 to avoid extradition to Sweden to face rape and sexual molestation allegations, which he denies. He has been there ever since, saying he fears Sweden will extradite him to the United States, where an investigation is ongoing into WikiLeaks' release of 500,000 classified military files on the wars in Iraq and Afghanistan and 250,000 diplomatic cables. The mass leak in 2010 deeply embarrassed Washington.
The lead prosecutor in the Swedish case, Marianne Ny, said she had reluctantly agreed to question Assange at the Ecuadoran embassy because the statute of limitations on some of the charges will expire in August, meaning that under Swedish law he can no longer be quizzed on those matters.
Reacting to the news of Assange's potential questioning in London, Wikileaks slammed Swedish prosecutors for waiting so long to make the offer.
"It is outrageous that the Swedish authorities have waited four and a half years to come to this decision," WikiLeaks spokesman Kristinn Hrafnsson told the news agency AFP.
"This entire saga is a black stain on Sweden's human rights record. It is time the authorities face it and drop the case entirely," he said.
One of Assange's main financial supporters, Australian-born campaigning journalist John Pilger, described the Swedish prosecutor's offer as "demonstrably cynical".
"In finally agreeing to come to London to interview Julian Assange… she has waited until just before Sweden's statute of limitations nullifies her threadbare case against him," Pilger said.
"She has wasted four and a half years of Assange's life — against whom she has never had a shred of evidence to charge him with any crime.

"Her behaviour is scandalous," he added.