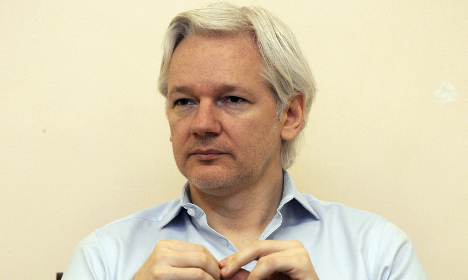 Julian Assange is still at the Ecuadorian embassy in London. Photo: TT

Marianne Ny, Director of Public Prosecutions, has also asked to have Assange's DNA taken via a swab.

"I have spoken to him early this morning – I think I even woke him up – and he said 'this is a great victory for me' in the case," Assange's lawyer Per Samuelsson said.
"But simultaneously he was irritated that it took so long for the prosecutor to do her job properly…there is a mixture of feelings," he added.

The Wikileaks founder, who has not left he Ecuadorian Embassy in London since he sought asylum there more than two years ago, is wanted for questioning in Stockholm following sex allegations made by two different Swedish women in 2010, claims which he denies.

The 43-year-old has refused to return to Sweden to refute the charges, fearing that Stockholm would extradite him to the US to be tried for his role in Wikileaks' publication of classified US diplomatic, military and intelligence documents.

Assange has previously called on Swedish prosecutors to travel to London to question him or, alternatively, to do so by video link. The British Foreign Office said it welcomed this possibility and would help to facilitate this, but prosecutors in Stockholm have up until now argued that it is not normal legal practice.

The announcement that he could be questioned in the British capital comes days after the Swedish Supreme Court agreed to hear the Australian's appeal to have the European arrest warrant against him lifted, as he continues to fight extradition to the Nordic nation.

Marianne Ny said in a press release on Friday that the reason the request to interview Assange in London has now been made is that a number of the crimes he is suspected of will be subject to 'statute of limitation' in August 2015, which refers to the maximum time after an alleged offence that legal proceedings may be initiated according to Swedish law.

"My view has always been that to perform an interview with him at the Ecuadorian embassy in London would lower the quality of the interview, and that he would need to be present in Sweden in any case should there be a trial in the future. This assessment remains unchanged," said Ny.

"Now that time is of the essence, I have viewed it therefore necessary to accept such deficiencies to the investigation and likewise take the risk that the interview does not move the case forward, particularly as there are no other measures on offer without Assange being present in Sweden," she added.

If Assange agrees to continue the investigation in London, this will be carried out by the supporting prosecutor to the case, Chief Prosecutor Ingrid Isgren, together with a police officer, said the statement.

"I cannot comment further on the case at this point, not least when such an interview will take place nor other details," said Ny.

Assange's legal team has told The Local that it plans to travel to the UK over the weekend to hold talks with Assange, before sending a formal response to prosecutors agreeing to the questioning.

"I am positive it will be a 'yes' as Assange wants to be interviewed," said Samuelsson.

He said it was unclear when the questioning would take place, noting that UK and Ecuadorian authorities would both need to be involved.
"This could take some time – you know how authorities work," he said.
"We don't think about legal time limits, the only thing we think about is proving that Julian Assange is innocent…When she [the chief prosecutor] hears his version of events, we are convinced she will believe he is innocent and will drop all her suspicions."
He added that he had not yet discussed Ny's request for a fresh DNA sample from Assange, but said: "he did give one before in 2010".

A lawyer for one of the women who has levelled the accusations against the WikiLeaks founder has also praised the prosecutors' offer.

"Assange did not make himself available to be interviewed in Sweden…That's why it is necessary to change the location of the interview," Elizabeth Fritz told the AFP news agency in an email.