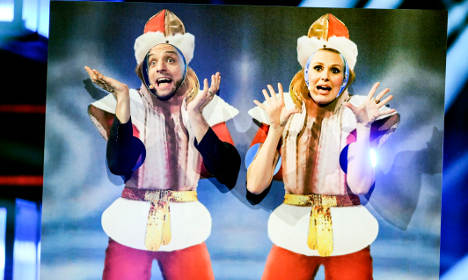 The Melodifestivalen final, in which Sweden picks its Eurovision entry, is one of the biggest nights in Swedish television. Last year almost 3.4 million Swedes packed themselves in front of the TV to send Sanna Nielsen off to the grand European final, a huge number in a country with a population still shy of 10 million.

Every year since 1956, member states of the European Broadcasting Union have been going head to head in the Eurovision Song Contest. This year's European final is set to take place in Vienna on May 23rd, after Austrian drag act Conchita Wurst's victory last year.

Among the biggest fans of the contest is Bengt-Urban 'Bubbe' Fransson, chairman of the Swedish branch of OGAE (Organisation Générale des Amateurs de l'Eurovision), the world's biggest Eurovision fan organization.

"Melodifestivalen has always been something that has united the Swedes. It is talked about everywhere, in the workplace, at breakfast meetings, in the fika room. Even if you don't like the music you watch the show so that you'll be able to join in the chat on Monday morning," he tells The Local.

On Saturday night, at least a third of the country is expected to tune in to Swedish broadcaster SVT to see the Eurovision hopefuls go head to head in one final extravaganza, so expats in Sweden would do well to heed Fransson's advice to watch this Europop feast.

"My tips to those who have never watched it before is to try to find someone who is a real Melodifestivalen buff so that you can find out more than just what they tell you on television. And read about it in newspapers; don't just sit down in front of the television totally unprepared, or it could be hard to follow," he says.

"A good song to watch to get a flavour of it in advance is Kikki Danielsson's 'Bra vibrationer'. It's a typical Melodifestivalen song. They should be catchy, joyful and have a positive message."

It has been a long road for the twelve acts. The five-week competition is one of the longest and most advanced in Europe. In fact, its reputation extends well beyond the borders of Sweden, with many fans tuning in from abroad to watch the final. One London-based The Local reader told us on Twitter that she would not miss it for the world.

Whoever wins will have big shoes to fill. Sweden is one of the most successful Eurovision countries — Loreen took home their fifth victory with 'Euphoria' in 2012 — sharing their second place with France, Luxembourg and the United Kingdom behind Ireland, which has racked up an impressive seven victories over the years.

"It's Sweden's national pride. Everyone really wants to send the right song so that we will do well in Eurovision. To some extent, we just like being the best. Swedes think that they're the best at a lot of things and are proud that Swedish music is doing well in the world. We often think that a lot of the other countries send songs that are a just little bit rubbish and say that 'we're going to show them how it's done'," jokes Fransson.

But despite the claims of wanting to be the best, in typical 'lagom' Swedish fashion, Fransson adopts a modest attitude when asked about his country's chances this year.

"The average quality of the songs is high this year; we haven't had many real lows, but the tops have also been few. Eric Saade's song screams Eurovision, Måns Zelmerlöw's relies more on the stage show. World music is very popular in Europe so I think Jon-Henrik Fjällgren's 'jojk' [a traditional Sami song] would do well in Vienna. Mariette's act is good, but on the continent they will probably think it's too similar to Loreen," he says.