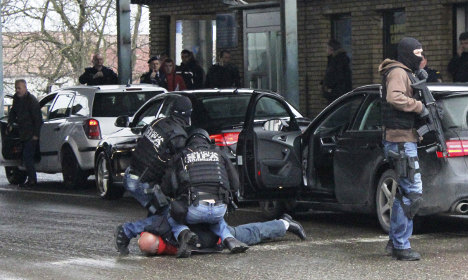 Three suspects were nabbed at the Bosnian border with the explosive device in their car. Photo: TT
The man was arrested in Bosnia on March 13th alongside four Bosnians after being found with an explosive device hidden inside a car, according to AFP.
Bosnian police said in a statement that the device was to be used for "a terrorist act" in a Scandinavian country.
"These persons are suspected to have produced an explosive device in Bosnia with the intention of delivering it in a Scandinavian country," the statement said. "The device was supposed to be used for a terrorist act."
But according to Swedish national police, the Swedish citizen, who is in his fifties, was not planning a terrorist attack, and is rather involved in high-level organized violent crime.
"We know that it is not so because my colleagues in the South are familiar with this person and can safely assume what the bomb was meant to be used  for," Andreas Fahlén, press officer at the Swedish national police authority, told TT.
"We will not go into more detail on this case, I have no further details about it, but we have an ongoing prosecutor-led case investigation in Malmö and we can link what has happened in this arrest to an ongoing case in Malmö," Nils Norling, police press officer in Sweden's southern Skåne region told TT.
The prosecutor at Malmö's Public Prosecution Office is to take over the case first thing on Monday, March 16th.
The operation, coded "Benelux," was carried out by Bosnian, Swedish and Dutch police, Bosnian police added in its statement.
Bosnian authorities earlier refused to provide further details, including the final destination or whether the suspects were linked to local Islamist movements.
In a separate statement, a Bosnian prosecutor said the Swedish citizen was "of Arab origin."
Three of the suspects, including the Swede, were arrested as they were trying to leave Bosnia in a car where the device was found, Bosnian police said, adding that another two were arrested in the capital Sarajevo.