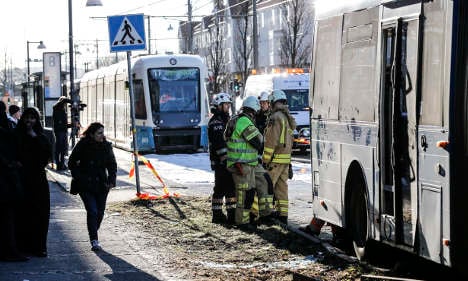 Authorities are investigating Friday's collision between a bus and a tram in Gothenburg. Photo: TT
Cause of the accident in Sweden's second city remains unclear, with separate investigations by both the police and Gothenburg's tram network (Göteborgs Spårvägar) underway.
"Hearings will be held and the bus and tram have been seized for investigation," Gothenburg police spokesperson Jenny Widen said.
The Gothenburg tram authorities are estimating that their internal investigation will take about three months, and will include an examination of the wagon, general infrastructure, and the driver.
The police have not indicated a timeframe for their investigation.
On Friday afternoon, a tram crashed into a stationary bus outside the main entrance of SKF, a Swedish ball bearing company, in the Old Town of Gothenburg.
Six of the 17 individuals injured in the crash have since left the hospital. A man in his 20's initially judged to have life-threatening injuries was reported to be in stable condition.
The condition of a man in his 30's who on Friday was considered seriously hurt has also improved, with his injuries now deemed mild.
Url copied to clipboard!