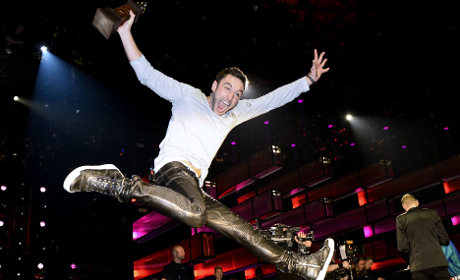 Måns celebrating his victory at Friends Arena in Stockholm on Saturday. Photo: TT

Since then, the 28-year-old from Lund has been a familiar face in Swedish media – and a popular teen pin-up.

He picked up the winning spot for his song Heroes, a catchy pop tune by Swedish songwriter Anton Malmberg Hård af Segerstad, also known as "Goldfinger".

The runner up of this year’s Melodifestivalen was Jon Henrik Fjällgren, who possibly gave the most soulful performance of the night, and certainly the most authentic. His Sami inspired song 'Jag är Fri' (I am Free), featured few words and traditional Sami joik, a form of sound-based singing.

The Local's guide to Melodifestivalen mania

Mån's stage performance no doubt played a role in his sweeping victory. The singer very comfortably interacted with a series of digital effects surrounding him — even landing a fist bump perfectly with a digital gnome.

A less comfortable moment in the evening occurred when show host Robin Paulsson experienced a most inconvenient stutter as he introduced Cyprus judge Klitos Klitou. The moment unfortunately did not go unnoticed, with co-host Sanna Nielson turning a slight shade of pink, and an ensuing and quite epic "awkward moment."

Måns will now participate in the 2015 Eurovision Song Contest, the final round of which will be held in Vienna on May 23rd.

The Eurovision Song Contest is an annual song competition held primarily among member countries of the European Broadcasting Union (EBU) since 1956, although Australia is set to join in 2015.

Swedish winners have include Abba in 1976, Thomas Ledin in 1980, and Swedish icon Carola, who won Eurovision in 1991 for her hit “Fångad av en Stormvind”. More recently, Sweden saw young star Loreen take home the heavily sought out award for her song “Euphoria” in 2012.