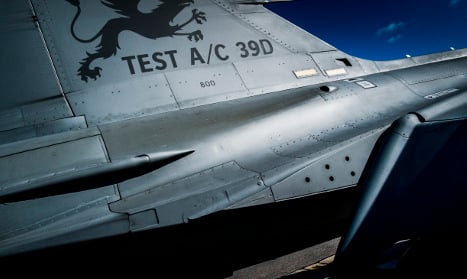 The Nordic nation’s biggest customers over the past five years were South Africa and Thailand, which accounted for 16.8 percent and 15 percent of total arms exports, according to the research. Swedish JAS Gripen jets were among the weapons sold to these countries.
Sweden’s other clients included the United Arab Emirates, Pakistan, Singapore, the Netherlands and Saudi Arabia.
The Stockholm International Peace Institute noted that 52 percent of exports from Sweden went to countries where democracy and human rights have been called into question.
But the Swedish government agency that controls the export of military equipment, the Inspectorate for Strategic Products (ISP) told the TT news agency that the figure did not represent a trend in Sweden.
“It is due to several large transactions that happened to coincide temporarily,” said spokesman Thomas Tjäder.
"Normally, 70 percent of our exports are to EU countries.”
Sweden’s spot as the 11th biggest arms exporter in the world means that it is responsible for almost two percent of the global weapons trade, a large proportion for a nation still shy of 10 million people.
Elsewhere in Europe, Germany, France, Spain and Italy all made the top ten.
The United States came top, followed by Russia and China.
Despite recent developments in Ukraine and Russia, the study found that arms imports in Europe decreased by 36 percent between 2010 and 2014.
The global study comes just days after Sweden’s government announced it would end a controversial military cooperation agreement with Saudi Arabia after Sweden’s Foreign Minister Margot Wallström sparked a diplomatic row by stating that the Arab nation was “one of the countries in the world that most clearly and systematically violates women’s rights”.
It is understood that Sweden will not immediately cancel all sales of weapons to Saudi Arabia, but will withdraw help in areas including military systems, training and transfers of technology.