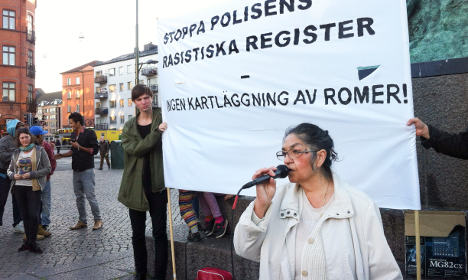 The Ombudsman on Tuesday strongly criticized a controversial register of Roma people compiled by the regional Skåne police in southern Sweden in 2013.

The list, which was declared illegal by the Swedish Commission on Security and Integrity Protection (SIN), included some 4,700 people, some of whom were children.

“The way [the database] was compiled and by not excluding certain information, it acquired a character of an ethnic register,” Ombudsman Cecilia Renfors told Swedish Radio on Tuesday.

The Local reported that Swedish human rights organization Civil Rights Defenders filed a lawsuit against the state of Sweden at Stockholm district court earlier in March, criticizing previous rulings in the case, which have stated that although the register was illegal for personal integrity reasons, the database had not been based on ethnicity.

But although the Ombudsman comments stated on Tuesday that it did not question these findings, it added that the Skåne police's database had “de facto acquired a character of a register based on ethnic background.”

The ruling added: “That this register happened to an already vulnerable group makes it all the more serious.”

And Robert Hårdh, head of Civil Rights Defenders, welcomed the comments on Tuesday.

“We think it is a good decision, because the Ombudsman notes that an ethnic register was kept of a particularly vulnerable group in society. This gives our case strong support ahead of a future judicial process,” he told The Local.

“Of course you could ask for the ruling to link the register even more to discrimination, but in our opinion the Ombudsman note what they are supposed to note. They direct more or less strong criticism of the Skåne police and to us this makes it even more evident that the ethnic aspect is something that cannot be disregarded,” he added.

Skåne police said the list was originally put together to keep tabs on Roma in southern Sweden who were suspected of crimes. The list ballooned, however, and started including children, reporters at public service radio's Romani Chib broadcast, and even the in-laws of Roma Swedes, and people who had passed away.

Against the background of the SIN ruling, Sweden’s Chancellor of Justice ordered last year that those listed in the illegal register would be entitled to receive compensation of 5,000 kronor ($768).

The Swedish Commission against Antiziganism recommended last month that a national institution be set up to protect Roma rights as Sweden faces a rising tide of hate crimes, against Roma groups, synagogues and mosques.