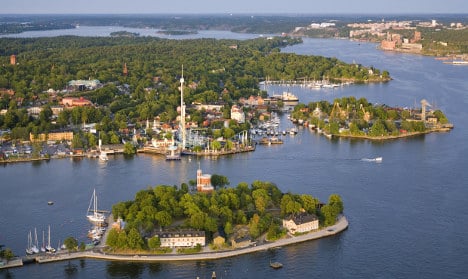 Is Stockholm better than Copenhagen? Photo: Image Bank Sweden/Ola Ericson
Here's The Local Sweden's defence of Stockholm, after our sister site The Local Denmark claimed it was based in the better city. Disagree? Have your say in the comments section below this article.
1. Stockholm's Metro system is a work of art
With more than 110 stations compared to Copenhagen's 22, Stockholm's underground network is much bigger than that of its Nordic neighbour and doubles up as a the world's longest art gallery. Nearly every station features art work from paintings and sculptures to mosaics. Stadion metro station. Photo: Elodie Pradet
2. We can ski or sledge to work
Copenhagen might be the city of bicycles but during the winter in Stockholm you can use cross-country skis to get to work, take a short cut across a frozen lake (yes Swedes really walk as well as skate over these) or pull your children to school on a sledge. You can also sample outdoor downhill skiing right in the city centre, thanks to the manmade Hammarbybacken slope, built on top of a rubbish dump. Before you start thinking that sounds a bit amateur, it's set to host the Alpine World Cup slalom race in 2016. Hammarbybacken slope in Stockholm. Photo: TT
3. We have a bigger archipelago
While both Copenhagen and Stockholm have historic city centres, Sweden's capital also boasts one of the largest and most beautiful archipelagos in Europe, with some 30,000 islands extending for 80 kilometres along Sweden's east coast. Here you can escape the city and swim, kayak, host barbeques and even sunbathe during the summer months. You can even reach many of the islands with a regular bus ticket or SL (Stockholm transport) card. The view from Stockholm archipelago island Björno in March 2015. Photo: The Local/Maddy Savage
4. Stockholmers are better looking
If you're gasping at our nationalism or shallowness here, don't worry, this is a claim we can back up with data. Men in Stockholm were voted the best looking in the world in a survey in 2012. Meanwhile last year 5,000 singles in the Nordic nations were asked who among their neighbours was most attractive. The Swedes won – by a long shot, while the Danes came last. Swedes may be somewhat shyer than other Scandinavians, but we challenge you not to miss the eye candy when you're travelling around the city on that lovely long Metro we told you about. Just be careful not to miss your stop.

Some beautiful Swedes. Photo: Image Bank Sweden
5. The world can thank Stockholm for the music
One of the biggest bands in history, Abba, hails from Stockholm and you can relive their top moments at the city's newly built Abba museum. But there's far more to Stockholm's music scene than '70s kitch. The city is a hub for electro and dance music as well as a strong underground techno scene.  Globally famous house DJs Avicii and Eric Prydz are from the Swedish capital alongside producer Max Martin who's worked with the likes of Katy Perry, The Backstreet Boys and Britney Spears. How many musicians from Copenhagen can you name? Swedish music fans also have the choice of a range of venues from the giant Tele2 and Globe Arenas to the ornate music hall Nalen or the waterside Debaser Strand in the city's hipster neighbourhood, Hornstull.

Swedes love to party. Photo: Image Bank Sweden
6. Stockholm is safer
Sweden's capital was ranked the safest city in Europe in a recent global study for the Economist's Intelligence Unit, which looked at factors including digital security, personal safety and crime, roads and transportation, life expectancy and healthcare. Copenhagen didn't even make the top twenty.

Stockholm is one of the safest cities in the world. Photo: Image Bank Sweden
7. Sweden's capital leads the way in fashion and design
How many homeware and clothing brands from Copenhagen have become household names elsewhere in Europe? Here in Stockholm, fast fashion label H&M has its headquarters and designers including Acne, Cheap Monday and sweatshirt brand Marc O’Polo were all launched in the Swedish capital. While Ikea hails from the small Swedish town of Älmhult, interior design and decorating fans can experience the world's largest flatpack furniture store in Stockholm, or browse the numerous chic homeware stores on Götgaten in the Södermalm area of the city. Acne is one of Sweden's hippest brands. Photo: TT
8. Our delicious food is more affordable
Denmark's capital may have a global reputation for Michelin-approved cuisine, but while Stockholm isn't far behind in the stars battle, it also boasts plenty of yummy restaurants that are cheaper (at least by Scandinavian standards). According to the Numbeo website, which compares the cost of living in different cities, a meal for two at a mid-range restaurant in Copenhagen will set you back around 750 Swedish kronor, compared with 650 for a similar experience in Stockholm. The Swedish capital also has a growing street food scene, in part thanks to its increasingly diverse population. Swedish meatballs for sale in an Ikea store canteen. Photo: TT
9. Stockholm is Scandinavia's original start-up destination
Sweden's capital is one of the hottest cities in Europe for start-ups hoping to follow the likes of music streaming site Spotify and and games maker Mojang to global success. The city has produced more billion-dollar online companies over the past decade than any other location in Europe, according to figures released in 2014 by technology investment firm Atomico.

Start-ups are popular in Stockholm. Photo: Image Bank Sweden
10. We have cleaner air and streets
You don't need a single penny to enjoy the final attraction on our list. Stockholm was named Europe's first green capital in 2010. Plus a recent three year study measuring air pollution in 25 European cities found that only Stockholm met the World Health Organization's quality guidelines. A third of the city centre is made up of parks and green spaces and the water connecting the city's islands is said to be clean enough to drink. That's if you're not too busy swimming, skating or sailing across it.