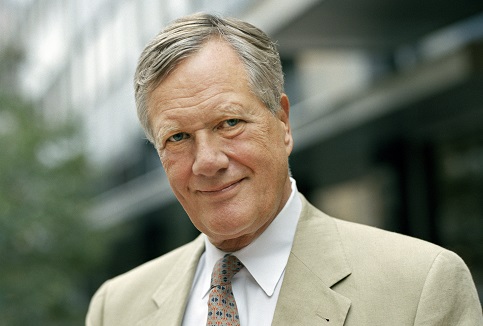 In Sweden, as in many other countries, it’s common for visitors to be offered coffee or water ahead of a scheduled business meeting.

But anyone meeting veteran Swedish business executive Michael Treschow, current chair of consumer-goods conglomerate Unilever, is in for a sweet surprise.

“What sort of ice cream would you like?” he asks politely, before reaching into the office’s iconic bin of GB Glace, the Swedish ice cream brand in which Unilever has had a stake since the mid-1980s.

Amid bites from his Magnum ice cream bar, the 71-year-old Swede, who claims to have spent “about 100 nights a year” living outside his home country over the last 40 years, reflects on how things have changed for Swedish companies looking to expand abroad.

“In the old days, you started here, and then perhaps Denmark and Norway, then you'd jump to Germany and the UK,” he explains.

“But with young entrepreneurs these days it’s boom, they go straight to China or Silicon Valley. They don't have to make all of those steps that companies did in the past.”

Treschow’s international career began in the early 1970s when he was sent to France to set up operations for Sweden’s Bahco Ventilation, a firm with roots tracing back to the Swedish inventor of the adjustable spanner, Johan Petter Johansson

At the time, a Swede moving to the continent wasn’t quite as common as it is today.

“Yes, it was a little unique back then. It was a little, ‘Oh, here's some stranger coming from the north’. I was regarded as something of a curiosity,” he recalls.

Of course, Treschow adds, Swedish companies have always had an eye toward markets abroad, which is part of the reason the country boast so many successful global brands.

“We’ve been pushed out because our home market has always been too small,” he explains.

“So when an idea comes, whether it's cheap clothing or furniture for every home, or ball bearings, you always want to expand and develop, and that's how that journey to overseas markets always starts.”

“Swedes can be socially lazy”

But when asked whether there is something that “makes a company Swedish”, Treschow pauses.

“Perhaps there’s an emphasis on quality, and some of those Lutheran values of doing good and working hard, and not cheating,” he says.

Another big change has been the explosion of communication channels that allow far-flung colleagues and clients stay in touch across long distances without leaving their desks.

“There’s a lot more interaction today,” he says. “All the new connections that are possible through mobile phones, Skype or whatever, is fascinating.”

“You still need to have physical meetings, that is important,” he explains. “If it's a big deal you’ll need to have the closeness of a personal relationship.”

And while Swedish companies have proven themselves adept at going global, Swedes themselves can sometimes exhibit more provincial behaviour, according to Treschow.

“We are much more reserved and sometimes, I would say, some label us as being socially lazy, and there's something to that,” he explains.

“Maybe it's shyness or that we come from a peasant and country lifestyle where we were very isolated. It's as if we haven't accommodated fully to being urban and being global. And I think we have to do a better job.”

The difficulties of adopting a global point of view have manifested themselves recently in a heated debate about Sweden’s immigration policy; a debate marked by strong rhetoric from the anti-immigration Sweden Democrats that leaves many, including Treschow, uneasy.

Many seem to forget, he says, that much of Sweden’s success over the years is thanks to the contributions of immigrants.

“At all the companies I worked for, if we hadn’t had immigration from Greece, Turkey, Italy, and Yugoslavia in the 1950s and 1960s, our prosperity would have looked very different,” he says.

Treschow admits, however that Sweden “is poor at integrating” immigrants.

“We need to do a lot of things to make sure we don’t have highly-educated people stuck driving taxis,” he says.

“There has to be a way to certify people that doesn’t take forever,” he says.

“There are too many examples of people with different sounding names approaching companies and hearing, ‘Oh, we don’t recognize this,’ which means people more or less have to change their names to be called to interviews,” he explains.

“Instead companies should be thinking, ‘Great, here we have some diversity!’”

Treschow claims to be “very excited” about diversity, describing it as an asset for any company and for Sweden.

“The more diversity you have around the table, the more likely you are to ask all the questions that need asking. If you are too harmonized or the same type of people, the risk is that there would be fewer questions asked and fewer new initiatives. That's why I think diversity is so crucial. And immigration is a dimension of that,” he explains.

“If everyone were just like me, things would be very boring.”

Leaning back in his chair, Treschow reflects how reaching consensus played a role in one of the most challenging chapters of his professional life.

As the newly installed chairman of Ericsson in 2002, Treschow found a company reeling in the wake of the deflated dotcom bubble. Sales and orders had plummeted, leaving one of Sweden’s corporate crown jewels – and major employers – on the brink.

As Treschow remembers it, finding consensus and a common cause was key to rescuing the company.

“When Ericsson was about to go under, if we hadn’t had unions and everybody together we would not have saved the company,” he recalls.

“We came together, we agreed on a path forward, no matter how painful, but we agreed and then we made the best of it.”

Treschow believes Sweden has succeeded as a hub for global business and innovation despite its location on the fringes of Europe. If he could choose to put Sweden anywhere in the world, someplace where you could “have the climate, the seasons, the winter, which we appreciate, of course”, he’d pick someplace a little further south.

“Probably something like Switzerland,” he reflects. “It’s a great place and simply closer to things.”

Indeed, Sweden is a bit harder to get to for business travelers and tourists alike. But Treschow reckons it can be worth the extra effort.

“I can’t think of a better place to be, especially in the summer,” he says.

And while he likes Stockholm’s Arlanda airport (“Terminal 2 is better than Terminal 5”), he’s worried that it can’t keep up with the increasing demand for travel into and out of Sweden.

“It needs to be bigger,” he says flatly.

“It's flooded right now. You can’t just say, ‘Sorry guys, you can't travel, we only have this many flights.’”

SEE ALSO: 'Sweden must connect the dots with India'

Of course, improvements to Arlanda or Stockholm’s infrastructure would never prompt Unilever to relocate its headquarters to Stockholm, says Treschow.

“There’s no logic in it,” he explains. “But I don't think there’s any reason to move Electrolux, or Ericsson, or Atlas Copco or the companies I know away from here either.”

And just because Swedish brands may be household names in many countries, doesn’t mean the rest of the world has a heightened understanding of Sweden.

“They often mix us up with Switzerland,” he says with a laugh.

“If you go outside of Europe they have very diffuse views on European countries, especially when it comes to the smaller ones like the Nordics. People ask, ‘what’s the difference?’”

Swedes could also be better at welcoming those among them who have lived abroad and have decided to return home.

“People aren’t excited or curious enough” to learn more about others' time overseas, he explains.

“The common response is 'isn't it great to be home again?' instead of ‘what did you learn? How was it? Tell me more about it.’”

As chair of Svenskar i Världen (SVIV), an organization representing Swedes who live abroad, Treschow suspects Sweden’s famed Jantelagen, which sees equality as a virtue, might be partly to blame.

“It may be some sort of power struggle, with people here thinking that others shouldn’t see themselves as something special just because they’ve been to China, for example,” he explains.

“The 550,000 Swedes who live abroad represent a fantastic bunch of ambassadors. And they can tell others, ‘Come and visit. Everyone is welcome,’” he says.

“If we have a common cause of wanting to develop our lives and develop Sweden as an end-product, I don’t think we can be welcoming enough.”