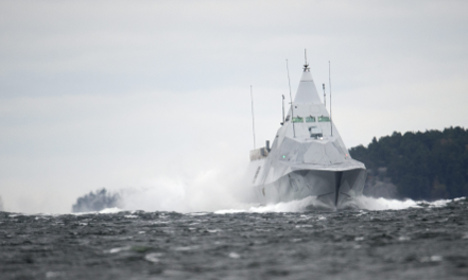 Swedish military search for a foreign submarine in October 2014. Photo: TT
The report describes Russian espionage against Sweden as “extensive”, noting that it has increased in connection with the Ukraine crisis.
According to Säpo, Russia has been illegally gathering information on Swedish defence, politics, technology and science as well as economic issues and asylum seekers.
Sweden's Security Service says that its Russian counterparts have also been attempting to recruit new agents within Sweden and have targeted military, police and expatriates.
“About every third Russian diplomat is an intelligence officer,” William Young, a chief analyst for Säpo told the TT news agency on Wednesday.
“They do not have a trench coat, hat or moustache. They are well educated, younger than during the Soviet era, socially competent and networkers,” he added.
While Säpo's report is based on top secret intelligence, it follows numerous public examples of a growing Russian military presence in the Baltic Sea.
In September 2014 two SU-24 fighter-bombers allegedly entered Swedish airspace in what the former Foreign Minister Carl Bildt called “the most serious aerial incursion by the Russians” in almost a decade.
The following month a foreign submarine was spotted in Swedish waters, although the Swedish military was unable to determine where it came from. Earlier this month a second 'secret' submarine hunt was also reported.
“I think that there is a new security situation in the Baltic area and in the Baltic Sea,” Sweden’s Defence Minister Peter Hultqvist told The Local on the day the first sighting was confirmed.
Last week the Nordic Council of Ministers (NCM), the intergovernmental forum designed to promote cooperation between Nordic nations, decided to shut down its Russia-based information offices “indefinitely” after the Russian Ministry of Justice in January included the council on a list of NGOs it considers to be “foreign agents”.
The closure came in wake of the Russian Embassy in Sweden blaming “the West, not least Sweden” for provoking the Ukraine crisis by offering Ukraine a pathway to membership of the European Union.
In large part due to recent aggressive moves by Russia, Denmark and Sweden also announced that they would step up military co-operation between the two nations. Sweden has recently entered into a similar agreement with fellow NCM member Finland.
Sweden's Defence Minister Peter Hultqvist has also announced that the country's navy is upgrading its fleet of ships in order to improve its ability to locate rogue submarines in Swedish waters.
On Wednesday afternoon he is set to reveal a further strategy to combat cyber attacks from foreign countries.
Säpo's annual report also highlights a terror threat from the middle east. It estimates that around 150 people have travelled to Syria to join Al Qaeda or similar terror groups, and believes that a further 100 may have also made the journey.
Around 50 of those fighters are understood to have returned to Sweden while 35 are thought to have died in the fighting.
But Säpo, which assesses the threat of a terror attack in Sweden alongside other government agencies does not suggest that the threat level should be raised as a result of events in Russia or Syria or following the recent shootings in Paris and Copenhagen.
Sweden's threat level has remained at 'elevated' since it was raised from 'low' in 2010 following a terror attack in Stockholm and what Säpo described as “a shift in activities among certain groups in Sweden, judged to be targeted at Sweden”.