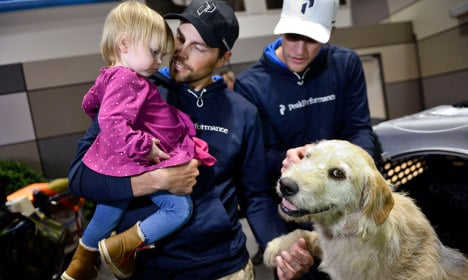 “It feels amazing. It's been such a long wait and it feels so great that he's finally going to get to come home. My youngest daughter Philippa, who's two years old, says 'woof woof' every time she sees his picture,” Lindnord said on Thursday as he prepared to collect the dog on Friday.

The stray dog first befriended the 38-year-old Swede's four-person extreme sports team which was taking part in the Adventure Racing World Championship in Ecuador, after Lindnord gave him a canned meatball in the rainforest.

At times the team – known as Team Peak Performance – tried to get rid of their new member because they were worried about his safety, but Arthur refused to leave their sides.

The love was mutual and a smitten Lindnord brought the homeless animal back home to Sweden in November, with permission from the Swedish Board of Agriculture (Jordbruksverket).

He is now set to pick up Arthur from the four-month quarantine on Friday morning and bring him home to his family – wife Helena, 38, and Philippa – in the town of Örnsköldsvik, on Sweden's east coast.

“The first thing we're going to do after he's released from quarantine is take him to the dentist to get his teeth fixed. And then when we get home, all we want to do is to cuddle Arthur and bond as a family,” he said.

The homeless animal, who became something of a celebrity in Sweden, even developed an international fan club, with news outlets including the BBC, USA Today, The Daily Mail and the Washington Post all reporting on the story last year.

And in Arthur's honour the team even launched Arthur's Foundation, a charity which campaigns for a change to the law in Ecuador to give more rights to wild dogs.

“We could not have imagined all this attention, not even in our wildest imagination. I went to Ecuador to try to win a world cup medal, not to bring home a dog. But some things in life you can't control. It's like we were meant to have Arthur," said Lindnord.

His family has even had to hire a press secretary for Arthur to sift though the massive wave of media enquiries about the dog.

Team Peak Performance will next head to Chile in the middle of April for one of the qualifying races for the next Adventure Racing World Championship. But this time, Arthur, 7, will stay at home on the couch.

"We'll maybe take him with us if we go some place in Sweden, but if we travel abroad he'll get to stay at home from now on," said Lindnord. 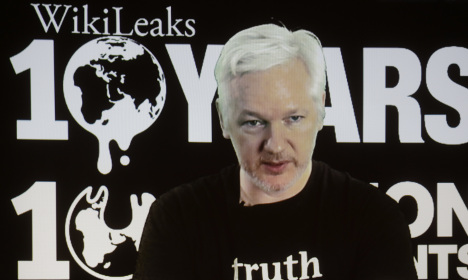 “Ecuador has granted the Swedish request for legal assistance in criminal matters and the hearing will be conducted by an Ecuadorian prosecutor,” the public prosecutor's office said in a statement.

Through his lawyer Assange welcomed the news saying he was looking forward to the “chance to clear his name”.

“We have requested this interview repeatedly since 2010,” his lawyer Per Samuelsson told AFP.

“Julian Assange has always wanted to tell his version to the Swedish police. He wants a chance to clear his name,” he said.

“We hope the investigation will be closed then.”

The lawyer added the “shape of the questioning is under discussion.”

The Swedish deputy public prosecutor Ingrid Isgren and a Swedish police inspector will also be present at the questioning on November 14.

“A DNA sample will also be taken, provided that Julian Assange agrees to it,” the public prosecutor's office statement explained.

A first hearing scheduled for October with the prosecutor Toainga Wilson had been postponed at Assange's request, citing “his rights to the protection and defence of his person,” according to Ecuadorian prosecutors.

The 45-year-old Australian sought refuge in Ecuador's embassy in London in June 2012, fleeing allegations of rape and sexual assault in Sweden dating back to 2010.

He had refused to travel to Sweden for questioning due to concerns that he would then be extradited to the United States over WikiLeaks' release of 500,000 secret military files on the wars in Afghanistan and Iraq.

Last month, the Swedish prosecutor's office rejected Assange's request to temporarily suspend his arrest warrant so he could leave the Ecuadorian embassy to attend the funeral of mentor Gavin MacFayden.

WikiLeaks has meanwhile returned to the spotlight in recent weeks with the damaging leak of tens of thousands of emails from the US Democratic Party and presidential candidate Hillary Clinton's campaign.