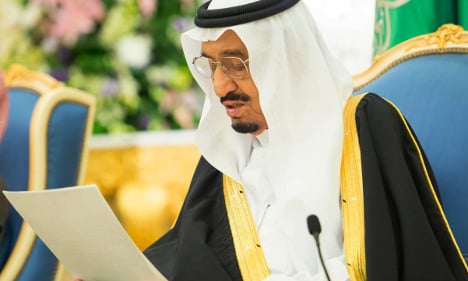 Per Jönsson, a middle east expert at the Swedish Institute of International Affairs, described the move as a "major escalation".

"We hope that visa operations will resume," said Erik Boman, a spokesperson for Sweden's Foreign Ministry.

"We are working as quickly as possible to resolve this bilateral issue between Sweden and Saudi Arabia and would like to have continued good relations," he told the TT news wire on Thursday.

On Wednesday the government announced that 50 companies have been invited to discuss the issue with ministers.

However the Arab country reacted strongly to the Nordic nation’s shifting approach, recalling its ambassador to Sweden and accusing Sweden of "flagrant interference in internal affairs”.

Dozens of other Arab nations have since criticized Sweden's decision.

"The world community, with its multiple cultures, diverse social norms, rich and varied ethical standards and different institutional structures, can not, and should not, be based on a single and centric perspective that seeks to remake the world in its own image," it continued.

Margot Wallström's scheduled speech and Sweden's decision to limit its military relations have been widely praised by human rights campaigners.