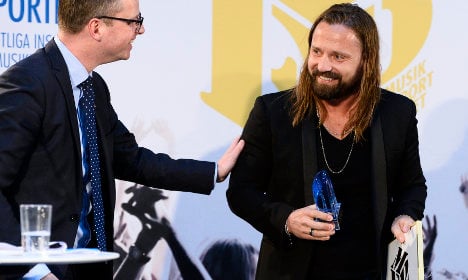 Max Martin picking up his award. Photo: TT
The annual prize, which was first launched in 1997, recognizes achievements in the music industry that have put Sweden in the international spotlight during the preceding year, and have therefore contributed to Swedish exports.
Past winners include Abba's Björn Ulvaeus and Benny Andersson, as well as house DJ Avicii.
Max Martin (whose real name is Karl Martin Sandberg), picked up the award at a ceremony at the Swedish Foreign Ministry. It was handed out by Mikael Damberg, Sweden's Minister for Enterprise and Innovation.
"Swedish music exports are an essential part of modern Sweden's image abroad and are therefore not only an important economic sector but from my perspective, also an important ingredient in the broad and successful promotion of Sweden [abroad]", Damberg said.
Max Martin won his first Grammy Award for Best Producer earlier this year after several of his songs topped charts across the globe in 2014.
He recently scored his 19th Number One in the US Billboard, making him the third most successful songwriter in the history of the American chart.
The Music Export Prize is only handed out to one person or group, but for the first time the panel also gave an Honorable Mention to another key player in the music industry.
That mention went to music streaming business Spotify, in recognition of the way it has changed the way in which music is consumed and the spotlight it has helped put on Sweden.
The company, which was launched in 2008, now has more than 60 million users. But it has faced criticism from some singers, including Taylor Swift, who argue that it should give a larger slice of its income to artists.
"I’m not willing to contribute my life’s work to an experiment that I don’t feel fairly compensates the writers, producers, artists, and creators of this music," Swift told Yahoo News.
It's chief executive recently published a blog post on the company's website complaining about "all the talk swirling around lately about how Spotify is making money on the backs of artists”.
“We started Spotify because we love music and piracy was killing it," Daniel Ek wrote, adding that the complaints upset him "big time".