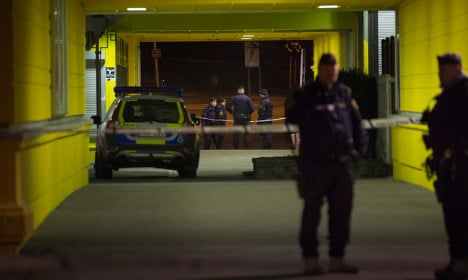 Police at the scene of the fatal shooting in Gothenburg late on Wednesday. Björn Larsson Rosvall/TT

What's the history of organized crime in Sweden?

Historically, we have had problems since the early 1990s, with motorcycle gangs being the first ones on the scene. Other groups – such as street gangs in the suburbs – have followed them and have, identity-wise, developed their own roles and norms. Today, the gang environment is… I don't want to exactly call it the Wild West, but something in that direction. Some years ago, it used to be very strong groups controlling the criminal world, but today we've got more and a lot smaller groups fighting for control of their areas – and that has increased the number of conflicts we see between groups and individuals.

That's hard to say. Generally, no matter the type of gang, it involves young men with a criminal background who from an early age have familiarized themselves with the idea of being part of a gang.

It's hard to generalize, but they include motorcycle gangs, street gangs, crime syndicates and mafia-like organizations based on ethnicity. The street gangs, which were likely involved in the Gothenburg shooting, usually include people from socially exposed areas, often first or second generation immigrants.

How have Swedish police managed to fight this?

The police, and not just the police, have generally been very bad at this. The society has a collective responsibility in that it has failed to take care of problems like unemployment and alienation. The police have handled separate incidents, but have on the whole not been successful in turning this around and have all in all not managed to handle the situation [of gang violence in general] as well as one could wish for.

What suggests organized crime could be behind the latest Gothenburg shooting?

The modus operandi. That they enter a building very much in public and execute people. It's very typical for gang violence that you want to send out signals, not just to those you attack but also other competitors. These types of incidents are not uncommon, we have had a number of them in recent years and what they have in common is that they are all carried out in public.

Should the general public in Sweden be worried?

No. There is a risk that a third party is injured, but it is never something gangs set out to do intentionally. It usually only happens either by accident or because they simply don't care if anybody else gets hurt. Gang violence is not the equivalent of terrorism in this respect. Injuring third parties is not good for the gangs' public profile and makes them appear unprofessional. But firing arms, especially if you're not trained, are difficult to control, so it does happen.

"Even if the act at Hisingen sticks out it is not unique when it comes to disregard for third party." – a tweet by Amir Rostami