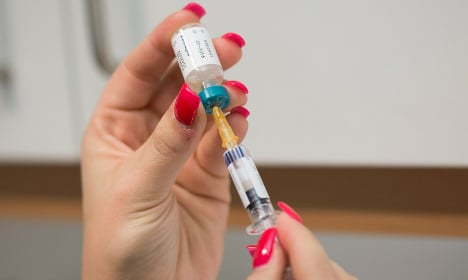 Back in 2011, German biologist and vaccination sceptic Stefan Lanka posted a notice on the internet saying that if anyone could send him scientific evidence proving the measles virus, he would pay them €100,000.

This is exactly what then medicine student David Bardens, who today works at a hospital in Hudiksvall on the east coast of Sweden, did. But Lanka rejected the six scientific studies he provided as proof.

A regional court in Ravensburg in southern Germany has now ruled that the sceptic must cough up, because all the criteria of his advertisement have been fulfilled.

“At first I thought it was very, very unusual that somebody wanted to pay out money for something that's already proven. Over 30,000 people have researched measles,” Dr Bardens told Swedish medical magazine Dagens Medicin when asked why he decided to take up Lanka's challenge in the first place.

“Stefan Lanka thinks that measles is a psychosomatic illness, he says that cancer stems from a psychological trauma and when you lose someone you get all kinds of possible diseases. I had seen how a 14-year-old girl died from measles. I got angry and thought that this was a provocation and I had to act,” he said.

The bizarre case, which was resolved last week but has only just hit Swedish media, comes after The Local reported earlier in March that recent outbreaks in other parts of Europe has spread to Sweden.

An epidemic in Berlin where hundreds of cases have been reported since October has sparked debates about the possibility of compulsory vaccinations, particularly after an 18-month-old infant died from the virus in February.

Since the beginning of last year, 22,000 cases of measles in seven European countries have been reported to the World Health Organization (WHO).

Measles is one of the world's most contagious diseases. Over 90 percent of those who come in contact with a sick person become infected if they lack the vaccination protection. Anyone who has been ill with measles has lifelong immunity. The most recent epidemic in Sweden broke out in 1919, when 43,000 people fell ill.

The disease can lead to complications including, in about one per 1,000 cases, acute encephalitis, which can be fatal. huge