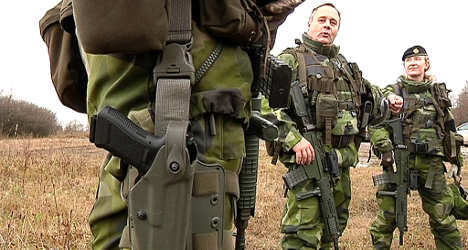 Sweden is expected to increase its contribution to around 30 troops. Photo: Fritz Schibli/TT

In January, Sweden announced it would join the US-led coalition against Isis militants in Iraq by contributing with 20 troops that would train Kurdish peshmerga soldiers stationed near the city of Kerbil in northern Iraq.

Now, the government is considering increasing the number of troops to 30, and deploying them within just a few months, a government source told Swedish daily Svenska Dagbladet in an article published Saturday.

According to the newspaper, the Swedish army has already begun preparations for the deployment and a proposal could be handed to the parliament for approval as soon as April.

“The government has ordered us to plan and prepare for a potential Swedish military contribution to the coalition against Isil,” Swedish army spokesman Philip Simon was quoted as saying, using another acronym for the group.

Thomas Hegghammer, a terror expert at the Norwegian Defence Research Establishment, told news agency TT that the move could raise the threat level against Sweden.

“It could motivate someone to carry out violent acts to protest,” he said, adding that the more Isis is threatened on the ground in Syria and Iraq, the more likely the group os to to carry out terror attacks.

“There will be more attacks. We can already see a marked increase.” Earlier this year, Anders Thornberg, the head of the Swedish intelligence service Säpo, said that more than 100 Swedes have been confirmed to be fighting for Isis.