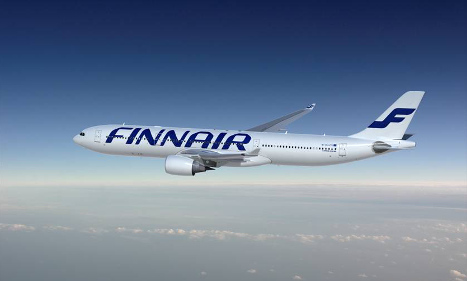 A Finnair flight. Photo: TT
The airline is planning to launch the new routes this summer as part of efforts to encourage more Finns to visit Sweden and to persuade more people living in Sweden to travel to Helsinki or onwards to other destinations in Finnair's network across Europe, Asia and North America.
In a press release, the company described Umeå as "the largest city in northern Sweden, with a growing population and vibrant cultural life", while Luleå, in Sweden's far north was dubbed a city "with a long history in steel manufacturing and technical know-how".
The airline is also taking over services previously marketed by Flybe Finland from Helsinki to two destinations in southern Sweden, Visby on Gotland Island and Norrköping. Finnair is set to fly to Norrköping daily, and to Visby three times per week during the summer season.
"Swedes have a high propensity to travel, and we're expanding our presence in Sweden to provide more Swedes with connections to our 15 Asian destinations. But we're also responding to more demand from Asian customers, particularly from Japan and China, who want to discover more of Sweden," Kenneth Gillberg, Finnair Sales Director in Scandinavia told The Local.
The airline already operates several daily frequencies to Stockholm and Gothenburg. It carries more than nine million passengers annually and connects 15 cities in Asia with more than 60 destinations in Europe.
Finnair has a reputation as one of the world's most sustainable airlines and will be the European launch customer of the next-generation, eco-smart Airbus A350 XWB aircraft.
Several other new European routes have recently been announced by rival Scandinavian airlines.
Flights between Sweden's second city Gothenburg and Cambridge in the UK started earlier this month, with the move designed to improve travel for staff working for Anglo-Swedish pharmaceutical company AstraZeneca in both locations.
SAS launched a new twice-weekly summer route between Stockholm and Bristol in south west England last year, which is set to resume this summer.
Finnair's announcement comes weeks after pilots from both SAS and Norwegian went on strike, with the latter reported to be experiencing financial problems after recording its first losses in eight years after launching long haul services to the United States.