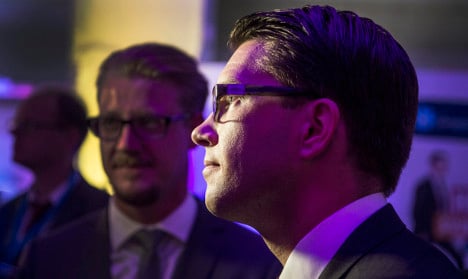 Jimmie Åkesson has been on sick leave since October 2014, due to chronic fatigue following his party's election campaign.
On Monday, sources within the party told Sweden's Aftonbladet and Expressen tabloids that he was set to announce his return at 9pm on Friday, during the popular television talk show Skavlan, broadcast on SVT.
Their comments followed an announcement on the party's Facebook page and website saying: "We are going to tell you something important on Friday at 21.00".
Reports of Åkesson's return contradict with claims made by political website Dagens Opinion over the weekend.
“Everything points to Åkesson resigning as party leader,” the website wrote, noting that the nationalist party leader’s sick leave was set to expire for a third time on March 31st.
Henrik Vinge, a spokesperson for the Sweden Democrats told The Local on Monday that there was "no point in speculating at this stage", promising that further information would emerge later in the week.
During Åkesson's six-month-long absence, Mattias Karlsson has been the party’s acting leader and some had suggested that he could take over the helm of the party permanently.
Why nobody cares if a Swedish party leader if off sick
In January, Sweden's Expressen newspaper published parts of an email written by Åkesson in which he said that he had full confidence in Karlsson.
He added that he and Karlsson had "worked closely together for over 15 years" and said that any suggestions about rivalry between them had been "completely plucked out of the air."
The Sweden Democrats are the third largest political group in Sweden, scoring a record 12.9 percent of the vote in September’s election.
The party remains angry that Sweden's Social Democrat Prime Minister Stefan Löfven scrapped plans to call a snap election in March, after reaching a budget compromise known as The December Agreement with the country's centre-right Alliance parties.
The nationalist group is currently embroiled in a row with the TT news agency after doctoring one of its photos of party leaders for a poster campaign.

A tweet by TT's political reporter Owe Nilsson showing the debated poster
Next to the slogan "In Sweden the government and the opposition are the same thing", the picture shows the top politicians from each party wearing identical cartoon-style caps.
TT says that clients that purchase its photos sign an agreement promising not to manipulate the images.
But Sweden Democrat spokesperson Henrik Vinge told The Local: "It shouldn't really be up to TT to decide whether we can do political satire or not. It's not their call. It's rather harmless [the poster] but it is there to beg the question of why we didn't get this extra election, which would have been more democratic".