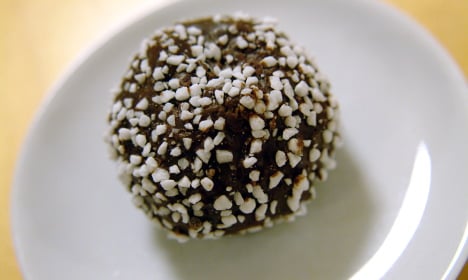 The word 'negerboll' should not be used to describe this snack. Photo: TT
'Neger' (negro), 'zigenare' (gypsy) and 'lapp' (a derogatory term for an indigenous Sami person from Lappland) are among the offensive words that will be followed by the phrase “använd istället” (use instead) in the next edition of Sweden's official dictionary produced by Svenska Akademien (The Swedish Academy), due for release next month.
The recommended alternative expressions for the above words are 'svart' (black), 'rom' (Roma) and 'same' (Sami).
A few offensive words have also been completely removed from the dictionary, including the widely debated term 'negerboll' (negro ball), which was historically used to describe 'chokladboll', a sweet chocolate snack covered in dried coconut.
Svenska Akademien is an independent cultural institution set up in 1785 by the country's former King Gustav III in order to advance the Swedish language.
Its dictionaries have previously noted which words in the Swedish language are currently considered offensive, but the organisation's books have never before suggested alternative expressions alongside them.
“I think it is good that people can actually get a tip of what can be used instead, a more neutral word,” Sophia Malmgärd, a lingustic advisor at Språkrådet (Sweden's Language Council) a government agency with a focus on language policy told The Local.
She said that she hoped that the shift in approach by Svenska Akademien could help reduce casual racism in Sweden.
“It is a better service for the readers, because we do get a lot of people calling up and asking questions about certain words. The obviously offensive ones people know, but they don't always understand what they should choose instead. Which words are derogatory changes with time,” she added.
Integration and immigration are hot topics in Sweden, which became the first European country in 2013 to grant automatic residency to Syrian refugees and has since seen asylum requests rise to record levels, which are still expected to reach about 90,000 in 2015. It is also experiencing an influx of Romanians and Bulgarians entering the country as EU tourists and then sleeping rough or in caravans around the nation.
Last week a survey by pollsters Ipsos commissioned by Swedish newspaper Dagens Nyheter suggested that more than 60 percent of Swedes believe that immigration is good for the country, but just ten percent agree that integration efforts are working well.
Speaking to Sveriges Radio on Monday, Professor Sven-Göran Malmgren who is editor in chief of the new dictionary said that Svenska Akademien's decision to offer alternative words alongside offensive ones was “affected by moods and debates in society”.
He added that his organisation was set to study the impact of the shift in approach on readers.
“Words are always really important. This is about how one describes reality and this in turn can have different motives,” he said.
The dictionary, which is the 14th edition by Svenska Akademien includes 13,000 new words and has also been adjusted to include a better gender balance when giving everyday examples to help explain the meaning of words.
One of the most talked-about new inclusions is the word 'hen', a gender neutral pronoun, a decision that made global headlines when it was announced by Svenska Akademiens decision last year, following years of debate.
“We wanted to make sure it wasn't just a fad,” Malmgren told Sveriges Radio in July 2014.
“But now it's quite simple. It is a word which is in use and it is a word which without a doubt fills a function.”
The new dictionary states that the word can be used when gender is unknown or irrelevant or as a third gender, for example when describing transexuals.