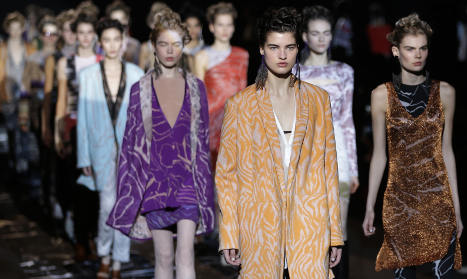 The man was arrested close to the Italian fashion capital, Milan. The alleged victim is not in this picture from March 2015. Photo: TT
The man, 42, from Cinisello Balsamo, just outside Milan, was arrested after the alarm was raised by a neighbour who heard the woman screaming, Italian newspaper La Repubblica reported.
The arrest came less than two years after he was released from prison after serving a sentence for kidnapping and raping another woman, the newspaper added.
The Swedish model was allegedly beaten and raped over a six month period, and was hospitalized in a “serious state of prostration, shock and malnutrition".
A spokesperson for the Swedish embassy in Rome told The Local it was working alongside the country's Ministry of Foreign Affairs, which had been “made aware” that a woman, who was previously resident in southern Sweden, had been “subject to violence” in Italy.
According to another Italian newspaper, Corriere, the woman left Sweden for Italy's fashion capital Milan last September in search of work, after taking part in a global beauty pageant.
Once there, the newspaper reported that she “fell into the trap of a fake agent”, who she met through Facebook.
The man allegedly convinced her to stay with him while he helped her to find work, the newspaper said.
It is also claimed that he forced her to cut contact with all friends and family apart from her parents, who she was allowed to speak to via Skype and Facebook so as not to raise the alarm over her disappearance.
Milan is internationally recognised as one of the world's most important fashion capitals, alongside Paris, London and New York.
Fashion designers including Giorgio Armani, Versace, Dolce and Gabbana and Prada launched their careers in the city.