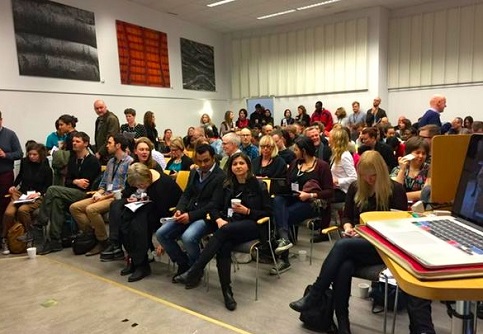 On March 20-21st, the Swedish city of Jönköping became literally a capital of investigated journalism.

An annual seminar, Gräv 2015, took place there and gathered more than 700 Swedish and international journalists who conduct important investigations on political, economical and social issues in their countries.

For many participants, the first day started with two workshops on advanced techniques of internet search from Henk van Ess, an independent web and new media consultant from the Netherlands.

“I like to find news in data," confessed Henk, and continued with an exciting master-class on finding literally any information about anyone on the internet.

As an example, he showed how he found names, addresses and even apartment interior images of a sadly known Jihadi John’s family in less than one hour.

In order to find hidden information within a short period of time, journalists can use geolocation tools which show activity of all social networks users in a chosen area. There are also special services which allow not only to look “back” through websites that have been already deleted, but also to know to whom they belonged.

With the help of a simple algorithm, the investigator can also got the phone number of a completely unknown person that he or she could have seen only on a YouTube video, for example.

Apparently, minimal user profile setting changes combined with correct verbal requests will allow curious investigators to get access to closed groups and pages. Using the same procedure it is even possible to discover all likes and comments done by a person without being his or her friend.

If in ordinary life the idea of Facebook-spying looks a bit creepy, for journalistic investigation it seems to be extremely beneficial.

Due to users’ active photo tagging and careless check-ins it is possible, for example, to prove unpleasant facts of voluntary participation of certain companies’ employees in international military crimes. At the end of the workshop Mr. van Ess stressed that such serious issues should be handled in a professional way and journalistic ethics plays even more important role in balancing between privacy and public information.

Henk van Ess is also co-founder of the European Centre for Computer Assisted Research and is a regular speaker on social media and 'digital diggingʼ at international conferences. His latest books are "The best ideas of 2013", "Handboek Datajournalism" (Boom, 2012) and Google Code (Pearson, 2011 – Dutch, German and French edition).