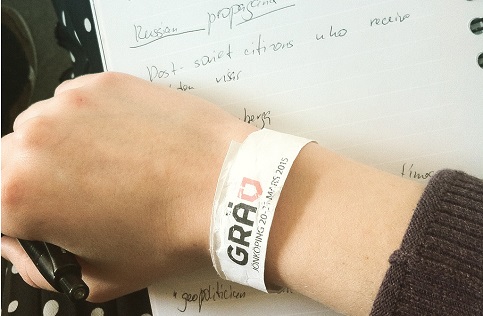 As  one of the biggest Swedish journalistic events of the year, Gräv 2015, hosted international experts that conducted investigations of social problems and political scandals in the region.

On the second day of the seminar, Senita Jemberga, a civic and media activist from Latvia, gave participants a new glance on propaganda issue. Her workshop enlightened key names and figures that were obtained during investigation of structures which promote idea of so-called “Russian world” (idea of unity and power of all Slavic nations under a guidance of Russia) in Latvia and abroad.

Using standard instruments of international influence ideologists of Russian government get their followers far outside of Moscow. For these purpose numerous foundations and NGOs are being created and financed by state and private funds.

As an example – Rossotrudnichestvo with 58 representations in 63 countries or Russkiy Mir Foundation with its centres in 44 and cabinets in 50 countries including one in Gothenburg. “However," said Senita, "It is important to distinguish where these units are really politically oriented and where they just spread basics of the culture, e.g. organising language lessons”.

Media is another important player in propaganda machine. Thus, media channel RT (former Russia Today) is broadcasting in 30 languages, 34 countries with 800 hours of daily programming. Another online resource Russia Beyond the Headlines has about 10 billions of readers all over the world.

And if it might be tricky to make the line between information and propaganda with media-resources, with concrete people it is much easier. Ms. Jemberga also touched upon the topic of last year’s referendum in Crimea, Ukraine.

In her opinion, international observers, presented during the voting are also no one but “soldiers” of Russian propaganda as through, theoretically, democratic procedure, they supported annexation of this territory.

According to Ms. Jemberga, propaganda of Russian power and its leading role in new politics is underestimated in western countries.

“Before we were accused in fascism just for striving for our independence. Now this role is taken by Ukraininas," she summarized at the end of the workshop.

Participants’ perception of the workshop was different basing on the country of origin. While representatives of Middle East and South Asia found it very informative, some guests from Eastern Europe pointed at a lack of unique examples.