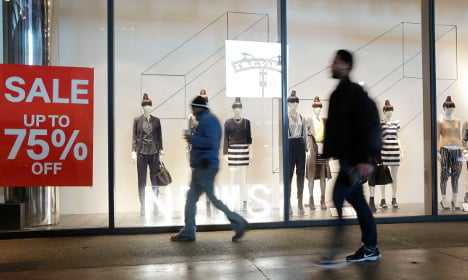 H&M, which is the world's second-biggest fashion retailer, reported that pre-tax profit grew to 4.7 billion kronor ($554 million) from 3.49 billion a year earlier in December, January and February. Analysts at Reuters had predicted a profit of 4.4 billion.

“We had a good start to 2015, as far as sales and results were concerned. One reason for that is our expansion, but the development for comparable units [stores and online sales] is also good,” H&M CEO Karl-Johan Persson told reporters on Tuesday.

The firm's total revenue during the winter months was 40 billion kronor, compared to 32.14 million the previous year.

Retail analyst Anne Critchlow, who works for French financial services company Société Générale, said the fashion giant had exceeded expectations, but singled out the March figures as less impressive. So far this month's sales have risen by nine percent in local currency.

“It is likely due to the weather; March in northern Europe has been cold compared to last year,” she told Swedish news agency TT.

At the end of the first quarter of the year, H&M owned 3,551 stores worldwide, and the Swedish fashion retailer said it plans to grow. In January it announced it would be targeting markets in India, South Africa, Taiwan and Peru in 2015.

“We continue our rapid expansion. During the first quarter we opened a net addition of 40 new stores. That's fewer than last year, but our goal is still to open 400 new stores this year,” said Persson.

“We're also planning more flagship stores and bigger shops. One of them will be on Manhattan in New York. It will be one of the company's biggest,” he added. H&M said it was confident that sales would remain solid despite pressure from a strong dollar.

"Although the strong US dollar will affect our sourcing costs… we will make sure that we always have the best customer offering in each individual market," said Persson and pledged to also continue H&M's online expansion in spring, with eight more websites targeting Europe.

"It is very important to always be able to meet customers' shopping demands and expectations in the fast digitalizing development that is taking place in the retail market," he told reporters.

The news comes just weeks after H&M was criticized by Human Rights Watch (HRW) over alleged child labour and poor work conditions in its supplier factories in Cambodia. One of the workers' claims was that bosses had been monitoring staff productivity.

H&M representatives told HRW that the company had not commissioned any productivity studies, but added that it was possible it could have been done without its knowledge.