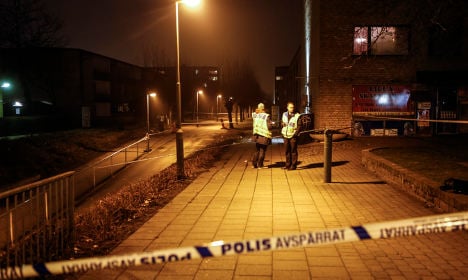 Multiple gun shots were fired at the man near Swedbank Stadium in the Bellevuegården area of Malmö just before 10pm on Tuesday, Swedish police said.

According to unconfirmed witness statements quoted by regional newspaper Sydsvenskan he was first assaulted by a group of men.

The man, who was in his twenties, was taken to hospital, but his life could not be saved.

Police brought three people in for questioning and later arrested two of them. They have now been remanded in custody. According to public broadcaster SVT they were previously known to police.

Meanwhile, a woman in her forties who was shot in the Gårda area of Gothenburg on Tuesday afternoon is being treated in hospital. A spokesperson for Sahlgrenska University Hospital told TT that her condition was serious but stable.

Police brought a man in for questioning on suspicion of attempted murder or attempted manslaughter less than an hour after the incident. A spokeswoman said that "some kind of relationship" existed between him and the woman.

Both shootings took place less than a week after a deadly attack in Gothenburg's Biskopsgården suburb that made global headlines. But police have been quick to suggest that the latest incidents are not thought to be linked to gangs.

p { margin-bottom: 0.25cm; line-height: 120%; }a:link { }
Both Gothenburg in western Sweden and Malmö in the south – Sweden's two biggest cities after the capital Stockholm – have been struggling with violent crime in the past few years, with the police taking measures such as increasing their presence on the streets and clamping down on illegal firearms.