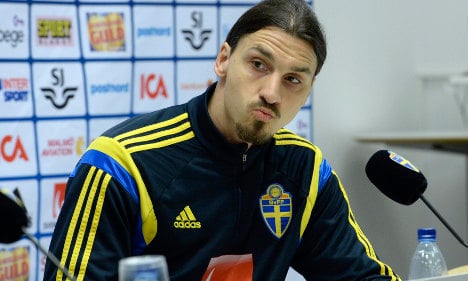 Zlatan at a press conference in Stockholm on Wednesday. Photo: TT
The 33-year-old caused a stir earlier this month after saying he thought France was "a shit country" while he was angry about decisions made by a French referee during a match for his Paris club PSG.
At a press conference in Stockholm on Wednesday he told Swedish reporters that he enjoyed living in his new adopted country, but added that he was still angry about Lionel Jaffredo's actions during his side's 3-2 defeat to Bordeaux, and cross about the criticism he has received since his outburst.
"I like France! Everything else is rubbish. I would not have come to France if I didn't like it, and I certainly wouldn't have extended my contract if I didn't like it. I would not have played for so long if I didn't like it," he said.
"They just want to drag me down from the top but I will not go. I like it on top. That's where I'll stay."
"I was punished instead of the referee for errors that he made," he added.
Asked if he felt the referee should face a punishment, he responded: "No idea. What do you think?"
Zlatan's much-debated comment following the match against Bordeaux was: “In 15 years, I have never seen such a referee. In this shit country, this country does not deserve PSG. We are too good for this country.”

He later apologized for his remark, saying “I expressed myself when I was upset and everyone knows that in these moments, the words surpass the meaning”.

The French league initially said it would decide last week whether or not to take sanctions over his outburst. But RMC Sport later reported that he would instead be called to appear in front of a disciplinary committee on April 9th.

Ibrahimovic, who is Sweden's top striker in history makes headlines almost as much for his offhand comments as for his footballing prowess.
He has previously come out with remarks including "a World Cup without me isn't worth watching" and mocked a local reporter who didn't have his own camera by asking “so it is low-budget?”.
When asked on Wednesday about the criticism of his latest outburst by French politicians, including the country's Prime Minister and Sports Minister, he told reporters that he only cared about negative feedback if it came from people close to him, adding that comments by journalists and politicians did not cause him to "itch" anywhere.
But the striker concluded with what appeared to be a threat that he might also criticize them in future.
"What goes around comes around," he said in English.
He also hit out at the decision to hand him a one-match Champions League ban following his sending-off against Chelsea recently.
"If you look at the situation, I am going to be punished more for an unjustifiable red card than the referee for his mistake… It is not acceptable," he said.
He will miss the first leg of PSG's quarter-final against his old club Barcelona in Paris on April 15th.
Sweden's UEFA European Championship game against Moldova kicks off at 8.45pm this Friday.