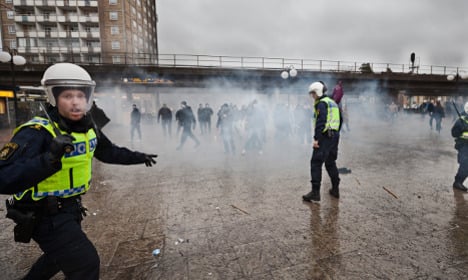 Police in Kärrtorp in December 2013. Photo: TT
The latest men to be convicted were found guilty of rioting at the demonstration which took place in Kärrtorp, a suburb of the capital in December 2013.
The unrest emerged when far right protestors attacked an anti-racism rally organised by local campaigners following an increase in Nazi graffiti in the area.
But the protests turned violent, with several people injured and some stabbed. Members of the neo-Nazi Swedish Resistance were seen throwing firecrackers and bottles into the crowds.
Eventually the right-wing activists were forced to retreat and flee the scene as the police battled to control the situation.
IN PICTURES: Stockholm rally turns violent
Fourteen people have already been convicted of crimes linked to the violence, including the man deemed the regional leader for Stockholm in the neo-Nazi movement, who was jailed for eight months after being found guilty of instigating a riot (våldsamt upplopp).
An extreme-left activist was sentenced in April 2014 to six and a half years in prison for stabbing a neo-Nazi in the back.
Various trials have been shown videos of the violence, depicting large throngs of people pushing up against each other in apparent attempts to repel the opposing group. The words "Adolf Hitler" and "Sieg Heil" were clearly audible above the din.
Police have investigated around 40 people in connection with the riots with different trials staggered over the past year.
Neo-Nazi clashes: one year on
The latest convictions come just days after an annual report by Swedish anti-racist foundation Expo suggested that Sweden's neo-Nazi organizations are declining in numbers, but their activity is growing in intensity.
Last year the number of neo-Nazi propaganda actions reached record heights, according to Expo.
It reported that activities organised by extreme right groups had risen by 23 percent, from 2,334 in 2013 to 2,864 last year.
“It's an enormous increase. Just in a couple of years, in three years' time, it has almost doubled. We have never seen this many activities before,” Expo investigator Anna-Sofia Quensel told Swedish Radio's news programme Ekot on Tuesday.